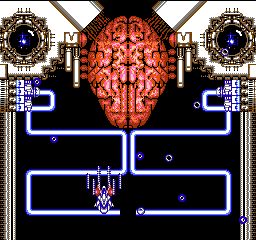 I’d say we received a pretty solid spectrum of shoot em up choices in the US when it comes to the NES. There are some dogs but the classics outweigh them. But even with that in mind there were still plenty of classics from big publishers that slipped through the cracks. How bizarre is it that Konami passed on Gradius 2 and Parodius? Hal Labs was no stranger to the NES with nearly all of their games hitting our shores but one curious exception would be Uchuu Keibitai SDF, a really cool shooter that shames most of the genre on the system. This hidden gem backs up its exorbitant price with good design and is one of the better games for the NES if you can find it.

Collecting any weapon pod will attach two satellites to the front of your ship. These fire your weapons and can act as a shield to absorb a hit but can also be destroyed. At the touch of a button they can be sent to the sides where they will fire homing missiles rather than the current option. The weapon selection is pretty light and while serviceable I do wish there were a few more options. The laser is obviously the most powerful but suffers from a narrow attack radius. The wide beam fires in three directions but will also change to the opposite of your movements. It sounds confusing and it is which is why I don’t really like it. The spread shot is my personal favorite as it covers a nice arc but lacks power.   Honestly while all of them have their uses there is no overwhelming favorite that is ideal in every situation which can be attributed to the level design.

The game uses a wider playing field than normal which does take some getting used to. Generally the game does a good job of making sure off screen enemies will not attack you unless you are herded in their particular direction. The level design is a bit odd in that sometimes there are entire chunks that can be avoided if you stick to one side of the screen but more often than not you will be ushered in whatever direction the designers want you to go. Each stage tends to vacillate between open areas and tight corridors that forces encounters which is necessary as the more methodical pace can be a bit boring at times.

I’ve frequently mentioned stages but in this case that isn’t so clear. There are no traditional level breaks outside of the few times the screen fades to black and you are in an all new area. After defeating what are very clearly supposed to be end level bosses the game will simply continue on its merry way. Its odd and few games do this like Truxton. Uchuu Keibitai is decently long by shooter standards and if I were to hazard a guess I would say there are about 8 or 9 “levels”, plenty to keep you busy for a while by genre standards.

In terms of difficulty the game puts up a fight but is also fair. The slow pace doesn’t hide the fact that the enemies are pretty aggressive and attack in large numbers. Despite large swaths of the game taking place in open spaces there are just as many tight corridors filled with turrets which make your choice of weapon all the more important. Weapon drops are frequent enough that even if you die it will only take seconds before another power-up appears. Unlike most games I found the journey to each boss more challenging than the actual battles themselves; despite their imposing appearance the bosses are pushovers in my opinion. All in all the balance is about perfect outside of the incredibly cheap closing gates that give no indication that you will die if you are on the wrong side. Overall though I wish more shooters were more along the lines of this rather than being soul crushingly hard.

Although it doesn’t look it at first glance Uchuu Keibitai SDF is a technically accomplished game. No matter how hectic the game gets (which is often) it rarely if ever suffers any slowdown. While it primarily takes place against an empty space background the times where you fly through enemy bases or planet side are filled with extremely detailed backdrops and even layers of scrolling on the same level as Crisis Force. The frequent bosses pit you against large motherships that are creatively designed and quite unlike any other shooter for the system. This is one of the better looking titles for the system let alone one of its best in terms of graphics.

Seeing as nearly every other Hal Labs game was released worldwide I’m surprised this never came to the US. It required no localization and was certainly better than similar titles such as Starship Hector and Image Fight. Without question this is one of the better shooters on the platform unfortunately its low profile also means it is also expensive.