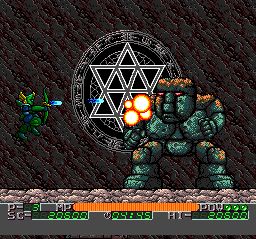 Keith Courage in the Alpha Zones was a middling experience at best, only remembered because it was the pack-in game with the Turbo Grafx-16. Let’s be honest, most of us would never have bought the game separately as it was just so bland. Despite outward appearances Granzort is not a sequel to that game but is just as disappointing. It isn’t unreasonable to expect games for a new platform to impress right out of the gate and Granzort fails spectacularly in that regard. The Supergrafx was doomed to failure before it launched and that exact reasoning more than anything is the only reason Granzort is even remembered at all.

Granzort is a licensed tie-in to the animated series Madō King Granzort and doesn’t so much follow the plot of the series as it uses its heroes to star in a side scrolling action game. In the series the Moon develops air that allows humanity to populate it and turn it into a tourist attraction. Soon however mankind realizes they are not alone and find themselves caught up in a war between two sides. 3 young boys are given weapons that allow them to summon mecha with special powers to help them fight.

The armored robots are the only interesting item from that premise and so the developers wisely chose to leave out their human counterparts. At any time you can switch between the three robots; red Granzort, with his sword and earthquake powers, green Winzart, with his bow and flight, and blue Aquabeat, equipped with a flail and the power to create a force field. The levels are pretty large with the path to the exit rarely being a straight line. Between the three robots the stages encourage exploration to look for power-ups or extra lives, especially since one hit equals death. If you’re looking for additional weapons aside from what each bot is equipped with you can forget it. The only things you’ll find most of the time are a shield to soak up one hit, invincibility and copious amounts of extra lives.

With their varying weapons and powers you would think the game would be set up to make you constantly switch characters but that isn’t the case. Winzart is just so much more useful than everyone else that I spent 95% of my time using him. Being able to snipe enemies from long distance is invaluable plus he can fire diagonally. If you manage your boost you can fly almost indefinitely and butt bounce enemies. The game is just heavily stacked in his favor. His attack power is weak which I guess is supposed to be his drawback but it doesn’t even factor. With turbo fire you can lock down enemies before they can move. Outside of one particular boss battle Aquabeat is completely useless and as much as I like using a sword it can’t compete.

It can’t be stated enough just how easy Granzort is despite the one hit deaths. The game literally throws extra lives at your feet if you do even the bare minimum of exploration. You’re not finding individual 1-ups but clusters of 3-6. It’s ridiculous. By the end of the second level I had 13 lives just as an example and toward the end of the game I had accrued 35. I suppose this is to make up for the lack of a life bar but anyone with some measure of skill will breeze through the game, especially if you rely on Winzart. Even the majority of the boss battles fail to provide any sort of challenge until the last few stages. You’ll have the game licked in 30 minutes and will never want to touch it again.

The game’s production values are lacking in comparison to the best Hucard games and are barely any better than first generation Genesis or Super NES titles. The extra grunt provided by the Supergrafx is used to produce more colorful visuals and backgrounds with a layer of scrolling which is laughable considering games like Aero Blasters or Sinistron achieved the same feat. The game is noticeably dark with little enemy variety and the environments start to blend together in the game’s latter half. I’m struggling to find something positive to say but really this comes across as a halfhearted effort.

A middling quest, extremely low difficulty, and bare bones gameplay is pretty damning as the game is a little expensive due to its rarity. That’s not even taking into account that you’ll have to buy a Super Grafx as well, which I’ll just say good luck with that. As the flagship title for the Super Grafx Granzort disappoints on almost every level. Whether it is its sub par graphics, lacking gameplay or an overall combination of both there are many Hucard titles that put this to shame. At that point why even bother with the system upgrade in the first place? Like Keith Courage Granzort is merely a footnote in gaming history.