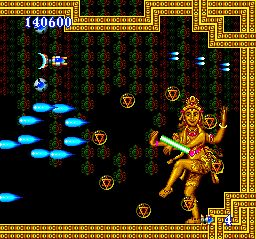 For a shooter to enter the crowded Turbo Grafx-16 market and stand out it has to do something different. Between the Turbo and the Genesis the market was flooded with nearly every incarnation of the genre possible. We remember the likes of R-Type, Super Star Soldier, and Thunder Force but for every one of those we received twice as much generic pap. Psychosis does not fall into that category on the strength of its interesting premise but in the end has nothing aside from it that would garner any interest. This is merely an above average game on a system inundated with far better games in the genre.

I’ll give the game points for coming up with something different story wise. The devil Ugar has invaded the player’s mind and plans to make it his own. Not wanting to give up without a fight you (the player) use your imagination to create a ship to battle the hordes of demons Ugar has conjured up within your subconscious.

Since the game takes place completely in your mind it allows it to avoid the standard video game tropes and introduce a set of levels, or causes as they are called, that are wholly separate from one another. The first level’s beach (which is odd in and of itself) is the most traditional but is soon followed up by a trip through a weird forest filled with overgrown plant life and inhabited by Noh masks. The boss of the level is cool ghost fox. The third cause is a bit lame as it revisits the beach except at night with blocks that cover up pieces of the environment. The Indian temple of the fourth cause is probably my favorite as it draws upon monsters from Hinduism and is the most visually inspired. Unfortunately because the game is only five levels long you don’t get to see as much of this variety as it is the lone standout of the game as the rest of it is highly derivative of similar titles.

The weapons system takes a page from R-Type as you are gifted with two options you collect any of the lettered power-ups. These options can be repositioned on all four sides of the ship to fire in all four cardinal directions. This is their most important use as the level design will often call for you to set them up for maximum efficiency. They can also function as a shield of sorts by converging on your spot and absorbing enemy fire and some collisions. The actual weapons themselves are typical fare and are remarkably unimpressive. The short range thunder is incredibly powerful against bosses but not for the fodder enemies. The wave beam is the closest you’ll get to focused fire but is lacking in power. The laser fires at an angle and is the most useless in my opinion.

In combination with the lackluster weapons available Psychosis is more challenging than the typical shooter. This isn’t the type of game where the screen is flooded with bullets however due to the construction of each stage it is very easy to end up with little room to maneuver, most prominently featured in the mini boss battles of the 2nd dream. Death kicks you back to a checkpoint and like Gradius trying to crawl back with no weapons is near impossible. The game makes use of all the cheap shooter tricks such as walls impenetrable walls that block your path suddenly and encounters with stronger enemies in enclosed spaces. In stark contrast I found most of the boss battles incredibly simple aside from the previously mentioned ghost fox.

Despite its scant five stages chances are you won’t finish this in one sitting, especially with limited continues. To see the true ending you’ll have to go through it twice which is supposed to make up for its short length I imagine but this is a shooter so you already know that it isn’t worth it.

While Psychosis is fairly unremarkable it is still solid. I struggle to recommend it however due to its short length. If it were 2 or 3 stages longer the game would be more than worth a purchase. As it is however only the most dedicated shooter fans need apply.