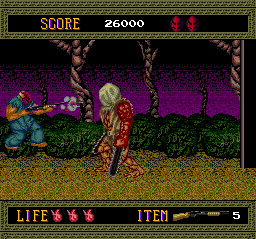 In the 80s’s the Friday the 13th series of movies were all the rage.  For Christ sake, it starred a serial killer with a hockey mask, even if you were terrified you were at least interested in seeing what the movies were about.  While there was a Friday the 13th game for NES, the less said about that game the better (Acclaim strikes again!).  So in 1989 when an arcade game starring a masked vigilante highly reminiscent of Jason showed up everyone took notice.  That game was Splatterhouse.

Splatterhouse was released in arcades worldwide in 1989 with a variety of ports to follow in the coming years.  The most popular of those would be the Turbo Grafx-16 version released in 1990.  Rick and Jennifer are 2 college students who visit the mansion of Dr. West for some god forsaken reason.   With the nickname Splatterhouse common sense would tell you keep out.  After being attacked in the dark, Rick awakens to find Jennifer gone and the Terror Mask affixed to his face.  Deciding to use the power the mask has granted him Rick sets out to rescue Jennifer.

Splatterhouse is a beat ’em up as you control Rick through seven stages of the West Mansion.  The only moves in his arsenal are a punch, kick, jump kick, and a slightly difficult to perform slide kick.  Weapons are scattered around the landscape for your perusal, such as shotguns, cleavers, and 2x4s.  Sadly if you receive too many hits they disappear and you cannot carry them over to the next segment of any level.  There’s a decent selection of enemies to fight that will you keep you on your toes due to their attack patterns but for the most part you’ll breeze through the game.  And therein lays the problem.

The game is not very exciting for a number of reasons.  First is brevity.  Each stage lasts a few minutes at most, at only 7 levels long more than likely everyone will finish the game in about half an hour.  The small repertoire of moves means the game becomes repetitive very quickly, although I suppose the brevity of the game takes care of that.  The rush of donning a makeshift hockey mask and going on a rampage can only last so long; everything explodes in nice puddle of goo and gore but that isn’t enough to carry the game.  To be fair this is an arcade port so the game is only guilty of being faithful to the source material, but that doesn’t change the fact that the arcade game wasn’t that interesting to begin with.

TG-16 on the left, the Marty on the right.  You can see the stark differences very clearly.

There were 2 of ports of the game, the Turbo Grafx-16 & the FM Towns Marty.  I seriously doubt 90% of the English speaking world knows what the hell the FM Towns Marty is so briefly: the Marty was a technically 32-bit console released by Fujitsu in Japan and is essentially a PC in console form.  While not very popular it received many arcade perfect ports, which is also the case for Splatterhouse.  Unfortunately that doesn’t do the majority of us any good since we’ll likely never bother hunting down a Marty.

The Turbo version is very faithful to its arcade brethren but for its American release a number of really stupid cuts were made.  Many of the cut scenes were removed or simplified, a lot of the gore and violence is toned down, and most of the religious imagery has been changed or removed.  One change that does make sense is the mask: its red and more skull like, more than likely to keep Paramount off their ass due to similarities to Jason Voorhees.  Funny that.

Back in its day Splatterhouse caused something of a stir because of its subject matter and closeness to a certain movie franchise.  Sadly the game does not back up its premise with good gameplay.  This was notable for its gore and violence but that can be found in spades elsewhere in much better games.