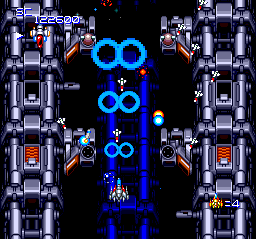 In Japan the Star Soldier series was so popular that Hudson Soft held annual gaming tournaments based around it known as the Caravan festival.  These competitions were held for many years with a new iteration of the series serving as the focus each time.  Super Star Soldier would be the first true 16-bit installment in the series (Blazing Lasers came first but is a separate game) as well as 1990’s entrant in the Caravan festival and was everything gamers expected of a shooter from that era: bigger, badder, louder, and full of a level of excitement that just wasn’t possible on the NES and Master system.

The Star Brain corps who terrorized the galaxy in Star Soldier has returned, now being led by the ultimate space ship Mother Brain.  The Neo Ceasar star fighters are the Earth’s only hope against their fleet.  This is the first real sequel to the original; there were plenty of games released after Star Soldier that shared many similar gameplay elements such as Starship Hector and two other arcade games but Super Star Soldier is the only one that truly carries on the series legacy.

In many ways Super Star Soldier and Blazing Lasers have an almost identical weapon system.  Rather than roman numerals each weapon here is represented by color: red for an enhanced main cannon that fires in multiple directions, yellow for the powerful but short range flamethrower, green for lightning and a blue rippling spread gun that puts the one in Gradius to shame.  Collecting more of each will power it up even further although taking shots or collisions will reduce it one level.  Unlike most shooters you’ll have to choose between homing missiles and option drones.  There are no super bombs but once you’ve maxed out a weapons power any further upgrades will detonate when collected so theoretically you can have an infinite number considering how frequently weapon pods appear.

The leap to more powerful hardware has done wonders for Star Soldier’s gameplay.  Very few shmups at the time could compare to the level of madness present at any given moment during any one of Super Star Soldier’s eight levels.  Enemies attack in elaborately arranged formations and in greater numbers than you would expect; this was bullet hell during the early 90s.  All of this intensity is brought to you with next to no slowdown whatsoever.  At most I can only remember two such instances.  Succeeding in the game all comes down to keeping a level head and realizing that a power-up is always just a few short seconds away when you need it.

Despite the insanity of the constant barrage of enemy fire Super Star Soldier always remains fair.  Taking hits will only reduce your ship’s power, with death only coming at its lowest point.  In a neat gesture of generosity you will always respawn immediately unless you have 3 lives or less; it’s only then that the game will send you back to the beginning of that stage.  Weapon drops are more frequent than in most games of this ilk so even if you get sloppy help isn’t too far behind.  In fact they are so frequent you’ll actually end up dodging them in order to hold on to your currently selected weapon.  In the event that you’re left with nothing but the standard cannon victory is still possible since the bosses aren’t impossible bullet sponges.

Notably absent is the option of two-player coop, a staple of the genre.  It would have gone a long way towards making the seemingly endless hordes of the Star Brain corps more manageable with a partner at your side.  This omission becomes even more conspicuous considering the game has an option for a two and five minute caravan modes, which are essentially score attack challenges for multiple players.  Sure you can simply pass the controller around but it would have been far more convenient to add in multiplayer.

Super Star Soldier has more in common with Blazing Lasers than just weaponry.  Both games share a similar graphic style despite being developed by separate teams.  The game covers many of the familiar tropes such as star fields, forests, and the requisite fire level but you could just as easily swap them with a similar level from BL and wouldn’t notice the difference.  One could argue that there are only so many ways to draw massive space ships and the like but a little more creativity in the art design would have gone a long way.  It’s a solid visual package overall but can’t quite shake the feeling that you’ve been there and done that.

As Hudson’s first 16-bit shmup Super Star Soldier is a solid entry in a series that had a less than admirable start.  Even in spite of the last 20 years of progress within the genre it still manages to bring a manic sense of urgency to its action that gamers of all stripes will appreciate and is still a challenging but fair game today.