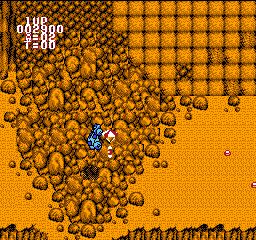 I can’t really pinpoint why I was so disappointed in Breakthru.  I certainly never saw it in the arcade so I had no fond memories of the game nor was I anticipating its home port.  If I were to hazard a guess it would probably be the massive let down that came when my family and I literally finished the game an hour or so after we bought it.  When you’re a little kid a new game brought an unspeakable high so to see it doused by mediocre gameplay and an all too brief experience only heightens the disappointment.  With those two factors working against it I guess you could say Breakthru never stood a chance.

I will say that the game certainly has an interesting premise.  Experimental fighter plane PK430 has been stolen and it’s your job to “break through” the enemy’s stronghold in your buggy to take it back.  Since you are (presumably) on foreign soil the entire country has it in for you and will stop at nothing to end your life.

Like I said I never played Breakthru in its original arcade incarnation but if it’s anything like its NES counterpart, which is a reasonable assumption, I would have hated it there too.  You can see traces of its arcade lineage in the number of cheap deaths that lie around every corner, a tactic to keep the quarters flowing into the machine.  At home that doesn’t fly, and results in a controller flinging experience due to the game’s identity crisis.  In spite of any cheap tactics thrown your way the game is still short enough that you’ll have it licked in an hour.

Your buggy might as well be Mario on 4 wheels.  With the ability to jump insane distances there is quite a bit of platforming in the game.  Momentum plays a large factor in these parts and will largely determine your success or failure.  The controls are a little bit odd; A shoots, B jumps.  Right there the game has committed quite possibly the greatest sin of the eight-bit era.  Super Mario Brothers perfected the default control setup pretty much all NES titles would use because it made sense.  A big fuck you to all developers who thought reversing that layout made any sense.  Left and right not only control direction but your forward momentum as well.  While it seems like a practical setup the game’s design does not properly support this set up.

At its core Breakthru can’t decide whether it wants to be a shooter, platformer, or a racing game.  There are tons of enemy tanks, soldiers, and other assorted baddies blocking your path that you can either avoid or choose to break through (heh).  Unfortunately there is usually a large gap, body of water, or other blockade that needs to be crossed literally seconds behind.  If you speed up to have enough momentum for these jumps you’ll inevitably run straight into enemy fire.  If you’re too slow you won’t cross the gap.

Increasing your speed in general is usually a trap as the enemies are densely packed, leaving you no choice but to fight to survive.  Technically you can simply jump over them but there’s no telling what lies ahead and there’s nothing worse than landing on a fence and being shot by a 2 pixel army ranger.  The cheap deaths stem from a number of factors such as sudden rocket strikes, unpredictable helicopter fire and my personal favorite, platforming sequence that give no indication of the direction you have to move, leaving it up to trial and error.

But even in spite of all these issues Breakthru is still simple and repetitive enough that no one should have any trouble completing its five stages in less than an hour.  The question is though why would you even bother?  There was no satisfaction at a job well done in my household back in 1987, just the overwhelming sense that we had wasted our money.