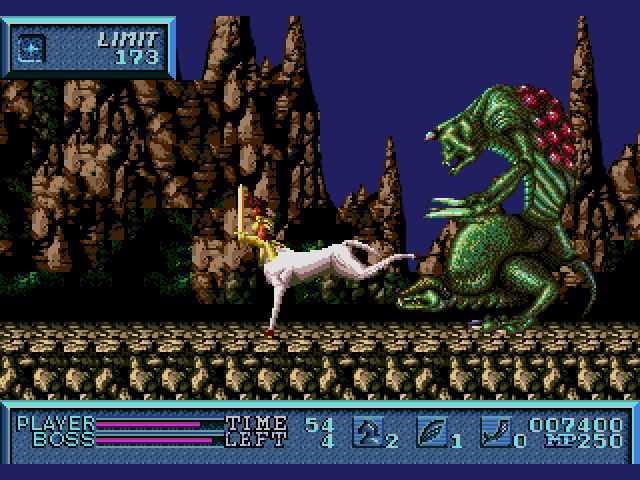 Growing up I loved fantasy movies like Willow and the Never Ending Story.  This fetish for the material fostered an interest in hack and slash action games like Legendary Axe and Astyanax.  So you can imagine my excitement when I heard of Saint Sword for the Genesis.  Rastan Saga II had already disappointed me (after really liking the Master system port of the first game that was a kick in the nuts) and I looked forward to washing away that game’s mediocrity with something with a little more….quality.  While Saint Sword fares better than that train wreck it also does little with the kernel of potential it shows with its many unique gameplay ideas. I mentioned Astyanax initially due to the similarities between the two games.  You can level up twice with points, at which point your attack power and speed increases.  The difference is notable immediately with a level 3 Macress decimating most enemies in one or two hits with his sword.  After every level you gain a new spell powered by magic points, which are in abundance.  These spells perform a variety of functions such as destroying all enemies, invincibility, restoring health, and even stopping time.  In addition to spells you can morph into 3 new forms: Centaur, Merman, and Birdman.

The objective of every level is the same: destroy all enemies until one of them drops the key needed to open the door to the boss at which point the game will guide you there.  Nearly every level is pretty expansive and chances are you’ll come across the exit first.  For the first few levels you won’t even have to search for the key; more than likely it will drop randomly while exploring.  The game sees a noticeable spike in difficulty at the halfway point around level 4.  At this point the key is held by a specific enemy and the levels are divided in two, meaning you’ll have to find two sets of keys before the finale.  The number of trap doors and random teleporters starts to increase, making the overly generous time limit that much more menacing. This is a sizable adventure unfortunately the world is completely boring to explore.  Every level pretty much recycles the same enemies and only swaps the color palette in a vain attempt to fool you into thinking they’re new.  Its laziness at its finest and to  make matters worse Taito took a page out of the Ghost & Goblins handbook and forces you to play through the game twice to reach the true final boss.  Force is probably the wrong word since you’ll probably turn the game off at that point. Saint Sword came loaded for bear with many items and abilities that should have kept gameplay fresh but somewhere along the way the developers forgot to provide compelling reasons to use any of it.  The default sword is so fast and powerful at level 3 that it trumps all of your magic spells and items.  It’s so fast and easy to hit that point even if you’ve died that all other items are essentially useless in comparison.  The different spells are convenient (especially the one that grants extra transformations) but wholly unnecessary due to the overwhelming power of the sword.  Honestly I forgot they were even there.  Stopping time might have been useful during boss battles if it actually worked on them; you are rarely attacked by more than 3 enemies so the Dragon Fang is overkill in that regard.  The Lightening sword and Dragon’s Meat (restores health) however do come in handy every once in a while.

You have access to three forms; Centaur, Merman, and Angel.  Each of course has different abilities to help in the adventure and have limited uses although the game is pretty generous in providing extras.  I’ll admit that its pretty fun to sprout wings and fly through a level or run through it as a Centaur but that’s about as much of a thrill as you’ll get out of each one.  The three transformation spells see very little use during the course of the game.  I can’t think of any given situation in which the Centaur form was useful; in fact the shorter attack range outweighed the boost in speed.  The back kick requires too much setup to be effective for what amounts to less damage than a normal attack.  The Merman form could potentially see the most use but most of your sojourns underwater will be so brief that it’s a waste of time outside of one boss battle.  Taking flight should be an exhilarating experience but it has all the majesty of wet fart due to the stiff animation.  The levels simply aren’t open enough to make using it worthwhile although I will admit you can cheese a few boss fights with it. If I had to sum up Saint Sword using one phrase it would be wasted potential.  The game provides so many options and ideas but ultimately goes nowhere with them, leaving a generic hack and slash platformer as a result.