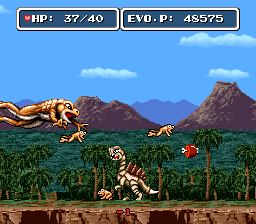 We’ll more than likely never know why Enix USA was so hell bent on keeping the SNES installments of Dragon Quest in Japan but in the interim they certainly released some very…..esoteric RPGs.  Some were interesting takes on established tropes that were marred by balance issues (7th Saga) while others were just plain strange (Robotrek, Paladin’s Quest).  You have to admire their daring at the very least.  One of their most original releases during that period was E.V.O – the Search for Eden, an action RPG that wouldn’t seem out of place on the PC than a 16-bit console.

I’ll say this, E.V.O. has one of the most original premises for a game.  Spanning millions of years the game follows the journey of one single organism among billions as it evolves to survive the harsh climes of each era.  Gaia, the embodiment of Earth guides every organism on Earth in a bid to find the ideal partner to reside with her in Eden.  While life is supposed to evolve naturally mysterious crystals scattered throughout the world are causing this process to occur at a rapid pace and no one knows where they came from……

Covering 5 distinct periods throughout time the game touches on some of the most iconic eras in history including the Mesozoic era (dinosaurs!), the Ice age, and the Paleozoic era.  You start out as the lowest form of life on the totem pole in each time but the goal always remains the same: explore the myriad sub levels and adapt your body to survive the numerous threats on your way to defeat the dominant life form of that period.

It’s the freedom to evolve your body the way you see fit that is E.V.O’s greatest asset.  By using the evo points built up by devouring other animals you can change any of 8 parts of your body.  There’s a wide range of parts choose in each category with each serving different purposes.  There might be 5 different tail choices but they each function differently.  You can create some truly beastly monstrosities from the upgrades available and it’s almost guaranteed that no two players will make the same beast. Those that really explore the system can even unlock hidden creatures such as humans.

Making the most of this system is never as simple as just buying the most expensive parts.  Each individual part will affect some other aspect of your character and if you aren’t careful it’s possible you could end up with powerful jaws able to kill in one bite but weak legs unable to catch your prey.  Paying attention to the indigenous creatures during each period and developing to counter them is the way to go.  There is no limit to how many times you can change provided you have the currency so it isn’t unheard of to make a quick change to deal with flying enemies for one level as an example.

As progressive as E.V.O is it isn’t without its faults.  No matter how much you’ve progressed the bosses are always leagues ahead in terms of strength and speed.  Winning comes down to luck more than skill in most cases.  There are clear patterns you can use to win but it feels more like cheesing your way to victory than a result of your skill.  If you‘ve been paying attention while playing the game you can also exploit the evolution system to fully restore your health at any time so that does even the odds a bit.

Because the game is so focused on evolution the level design (if you can call it that) suffers.  Most of the sub levels are a straight left to right paths with only a few enemies in between. There are a few maze like interiors to break up the monotony but it feels more like a petting zoo than a game.  Since each era is divided into so many sub levels you can see how this becomes grating.  Another point and one I realize is necessary so you don’t breeze through the game, once a new chapter starts you are back to square one like a rogue-like dungeon crawler.

The overriding originality of the experience does outweigh the game’s negative points however.  Up until Seventh Cross Evolution on Dreamcast and Spore there were very few if any games quite like this and its strong points are still worth merit.  If you’re in the market for something different E.V.O. is a worthy title.