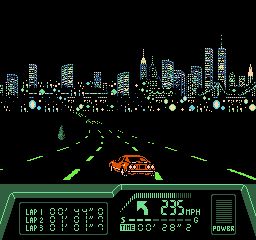 These days we live in a world where every game has a dedicated release date and Gamestop employees relentlessly hound you to preorder every game you’re even slightly interested in.  But back in the 80s that wasn’t the case.  Games more or less showed up in stores with little fanfare; even when video game magazines began to cover releases they only gave vague seasons or months.  So it isn’t so surprising that I wasn’t aware of Rad Racer 2 until I saw a preview of it on Video Power (remember that?).  As one of my favorite 8-bit racers I looked forward to getting my hands on RR2 and when I did I wasn’t left disappointed.

terms of the UI and general gameplay there have only been a few slight changes.  There is now a turn indicator on the dashboard in lieu of adding a minimap.  There is no choice of cars this time as I imagine most people settled on the Lamborghini anyway.  The biggest change is the removal of the over the top crashes that seemed to occur far too frequently in the original Rad Racer.  Now colliding with track side objects or other cars at high speeds will cause you to spin out and lose all speed.  With the tighter checkpoints instituted in the game even one spin out can cause you to lose a race but the developers have you covered in that regard.

The lone major addition to the game is the power blast.  By holding down and brake you’ll build up the power meter and once full by accelerating you’ll instantly go from 0 to max speed.  The method of activation sounds counterproductive since you’re effectively coming to a stop but the boost in speed and the ground it covers in seconds outweighs that fact.  That’s why it is best used at the start of a race or if you’ve been forced to a complete stop.

You’ll notice the feel of the car on the tarmac is noticeably different.  The car tends to cruise along on the track more briskly this time as there is less resistance in the turns at high speeds due to the looser controls; while it may have been frustrating to deal with in the original the way you were literally thrown to the opposite end of the road or drifted to the side depending on your speed was more realistic.  It does however make weaving through traffic and around corners easier which is a worthwhile tradeoff in the end.

Mastering how to activate the power blast becomes a crucial skill by the midpoint of the game as Rad Racer 2 has a steep difficulty curve.  All races are split into 3 laps separated by checkpoints that are much tighter than the first game as early as the first race.  You’ll frequently just barely reach each checkpoint unless you’re a perfect driver, which is next to impossible in this game.  Once you’ve reached Monument Valley the AI controlled cars become more aggressive in colliding with you and will actively try to ram you.  With the need to constantly cruise at top speed to reach the next checkpoint every square inch of ground you cover becomes a nerve wracking experience.

Even when you take into account the changes in handling and computer AI Rad Racer 2 can’t help but feel more like an expansion pack than a true sequel.  The track side detail and rival cars are all nearly identical and many of the courses bear more than a few close resemblances to prior tracks; Las Vegas and the Big Apple could pass for palette swaps of Los Angeles.  Hell even the first level in both games look near identical.  I suppose they were limited by the NES’s aging tech but they could easily have chosen more exotic locations for some visual variety.

While I’ve lambasted the game for appearing too similar to its predecessor at times it does at least look nice.  There’s a definite increase in the cars and background detail with the addition of parallax scrolling.  The tracks dip and peak more frequently which is a nice effect although it does sometimes impede visibility.  The nighttime tracks still look fantastic with their two tone color scheme.  For every step forward there have been a few steps taken back however.  The changing time of day is gone and the scaling of the cars has been changed for the worse as they flicker when closer to the screen.  The music is excellent but there are only 2 songs; they had the audacity to name the third “Sing Yourself” which basically means no music.

Rad Racer 2 is still one of the better racing games for the NES but its closeness to its predecessor can’t be ignored.  You’ll be hard pressed to find a better racer on the platform but those familiar with the series will experience a mean case of déjà vu.