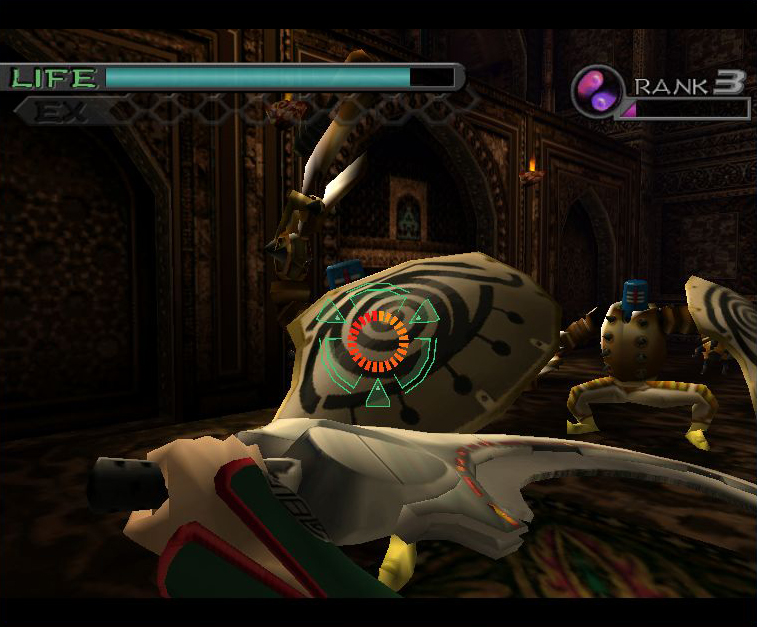 Years before Metroid Prime came along and coined the phrase “first person adventure” Maken X fell into that category.  The Shin Megami Tensei has been one of the most popular series of RPGs in Japan, dating as far back as the Famicom era.  The series has spawned countless spinoffs, of which Maken X is one.  While Half Life added many revolutionized the first person shooter genre by incorporating adventure game elements it was still a shooter at heart.  Maken X defies that description by almost completely forgoing ranged weapons altogether.  It’s an interesting design choice, and one that was pulled off successfully in spite of the technology of the time.

Kei Sagami is visiting her father’s lab to witness his latest creation, the Maken.  The Maken is a living tool, designed to bond with its subject and heal them from within.  Certain interested parties however are more interested in Maken’s ability to jack into a victim’s brain and steal their Psi, or psychic essence.  The activation of Maken is interrupted, leaving Kei’s father kidnapped and the Maken bonded to her unwillingly.  With no other options available Kei follows in pursuit to save her father.

Maken X is first person slashathon focused squarely on melee combat, which it manages to accomplish remarkably well.  In total the game has 20 levels and multiple paths to the 7 endings, giving it much replay value.  While controls in combat work pretty well the lack of dual analogue sticks makes navigating the environments a hassle.  While it was unavoidable back in 1999 anyone familiar with PC first person games or the more popular dual analogue setup will find it hard to go back and appreciate the finer points of Maken X.

While the box art prominently features Kei the actual main character of the game is the Maken sword.  At certain points in the game you have the option to brainjack enemies, taking on their persona and abilities as well.  Although you’ll only use Kei in her own body for the initial stage her mind is always along for the ride and in control.  Brainjacking is governed by level, with orbs collected functioning as experience.  Provided your level is high enough you can jack any designated character you come across.

There are over 20 characters you can ultimately control in total, each with their own stats and powers.  While certain story missions will force you to switch bodies you do have some freedom as to whom you’ll brain jack going along, and there are some hard choices along the way.  Jacking someone means leaving behind your previous body and if you’ve become fond of a character’s unique attack style it sucks.

Combat is fast and fluid thanks to a Z-targeting system taken from Ocarina of Time.  While locked onto an enemy you’ll always keep them in focus as you circle around them.  You have a full complement of moves defensive and offensive moves available such as a block, side step, back dash and numerous different slashes and thrusts.  Because the majority of the game takes place in smaller enclosed spaces it forces confrontation.

The majority of the time you’ll only have one or two enemies to deal with although the latter portions of the game begin to increase that number.   Learning some of the more advanced techniques will make combat a breeze, such as when to jump over a target for a critical attack or release the auto target to move faster.  While the game does ease you into the mechanics it quickly becomes crucial to know each enemies attack patterns when you are later pit against 2-3 different types at once.  The game becomes mind numbingly hard later on , mostly due to the non-combat controls.

The Dreamcast controller only has one analog stick and we were still 2 years away from Halo leading the charge and making dual analog the default standard.  Even taking this into account the controls can be clumsy.  The lack of a strafing option means turning left or right is painfully slow.  If you’re dealing with a ranged enemy more than likely you’ll take a hit to the face since you don’t move fast enough to turn and move out of the way.  There are times when enemies will drop in behind you unannounced and you’ll wonder where the hits are coming from.  It’s unfair to lose chunks of life to the failings of the controls, made even worse by the fact that you must start every mission over from the beginning.

While these issues are frustrating they don’t break the game completely.  As a matter of fact Maken X has enough unique ideas going for it that it’s easy to look past the control issues, especially since you spend the majority of time fighting anyway.  Those that like a long adventure should be prepared for a 10-12 hour journey to the end.  There are many branching paths along the way and your choices affect which of the 7 endings you’ll see.  More importantly since you won’t see all 20 levels in one pass it provides excellent replay value.

Graphically the game is a little bit rough but has its bright spots.  Although the game moves at a brisk 60 frames per second the environments can be a bit simple in design.  What really stands out are the awesome Kazuma Kaneko character designs.  Up until this point we had only seen his designs represented by smaller 2d sprites but the power of the Dreamcast finally allowed his bizarre designs to be perfectly represented in 3d.  Simply put no one else in the industry can create the kinds of weird and creepy shit that spawns from his pen, giving Maken X a visual look all its own.

While the music is only adequate the voice acting and the overall English localization have been completely ruined.  The English scripts jumps from point to point and despite completing the game I still have no idea just what the hell happened.  The voice actors lack any subtlety and emotion, which isn’t surprising considering what they had to work with.

So it all comes down to what you can tolerate.  The navigation controls aren’t the greatest and the story won’t win any awards.  However the presentation and combat mechanics work magnificently.  If you’re the type that can look past a few flaws to get at the gem underneath Maken X is for you.