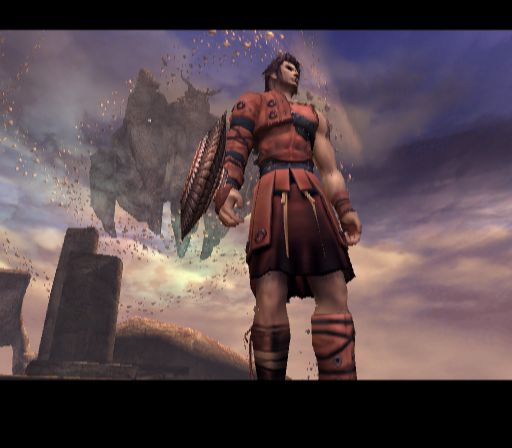 I thought for sure Rygar would be one of those brands that would be forever locked inside a vault.  Tecmo seemed completely uninterested in it and when you consider that it skipped two entire console generations you can see that it was a reasonable assumption.  But this industry is nothing if not surprising, so when Rygar: the Legendary Adventure debuted at E3 2002 heads were turned as it proved to be an excellent update of the old games while still retaining many of the elements that gamers loved back in the late 80s.

Rygar is one of many warriors who battle for the glory of the land of Argus.   One the eve of his receiving a wreath for his victory in battle Titans led by Echidna and Icarus attack Argus and kidnaps the Princess Harmonia.  Surviving his confrontation with the Titan forces Rygar finds the legendary Diskarmor and sets out to save the country using its power.

Steeped in Greek and Roman lore Rygar expands the lore of the series (admittedly that isn’t hard considering there were only two games, the arcade and NES) and both succeeds and fails.  The many lore tablets scattered around the island give back story to the history of the Titans and many of the game’s mythical figures; it’s a lot of information to digest if you are so inclined.  There are many historical Greek figures referenced throughout the game such as Aristotle, Icarus, Chronus, and Alexander the Great.  If you like Greek myth like me then Rygar has it in spades.

But the main plot of the game is confusing and very convoluted.  The dialogue is oftentimes confusing, with many characters spouting off about events that you’ve no inkling about.  It also doesn’t help that the voice acting is over the top with its melodrama.  For the most part they do play their roles in the story but if you can make sense of the plot you’re a better man than me.  A better script would have done wonders in keeping you interested in the story.  Luckily the focus is placed squarely on the gameplay, in which Rygar excels.

Cast in the same mold as Devil May Cry Rygar shares many of the same gameplay elements.   The camera is fixed in most areas with little room to rotate.   The majority of the time the camera is smart enough to give you the most optimal view of the action and it helps that most screens are in smallish arena sized venues.  Although it isn’t level based Argus is divided into 5 distinct environments you can travel to provided you have the necessary upgrades to reach them.

Players unfamiliar with the Rygar series are probably wondering what the hell the pizza looking razor blade attached to Rygar’s arm can do.  Imagine a bladed boomerang attached by a chain, there you go.  The Diskarmor is your sole weapon and tool throughout the game and will see a number of upgrades during the journey.  As a weapon the initial Hades Diskarmor provides an equal balance of range and speed to dispatch enemies.  There are 3 altogether, with the Sea Diskarmor sacrificing range for speed and screen clearing attacks and the Heaven Diskarmor better used from a distance.   While they share some basic moves each has a wide selection of individual combos unique to them and as a bonus you can switch in the middle of combat at the touch of a button.

Using the Diskarmor in combat feels visceral, for lack of a better term.   Tecmo went to great lengths to really bring out the weapon’s potential in game and it shows.  You can string together long combos, sometimes with as many as 10-20 hits if you’re good enough.  Many of the attacks look particularly brutal, such as snapping back the Diskarmor to really dig into enemies before returning.  The enemies in each section of Argus provide you with enough reasons to experiment with each diskarmor’s unique quirks.  The sea version is perfect for dispatching multiple enemies due to its quick speed.   The special attacks unleashed from each disk are useful as a last resort or to cause massive damage on bosses.

You’ll have to earn most of these upgrades, lest you think it’s all available from the start.   There are tons of item drops that increase maximum health or Icol but more importantly are the mystic stones.  The mystic stones can be equipped in each Diskarmor and can add effects, such as more defense or new special attacks.  Each Diskarmor levels up with use, enabling the use of more stones.  The stones are well hidden and make revisiting prior areas a worthwhile endeavor.

Traversing the environments using the Diskarmor as a grappling hook or a winch will make you appreciate the level design.  It’s a nice call back to the various tools you had to find in order to reach new areas in the NES game, one I’m glad to see Tecmo follow up on and expand.  As I mentioned before, most areas are small size but with multiple rooms that flow into each other naturally.  Each new area is at least distinct, from the Poseidonia Shrine’s cramped corridors to the scattered floating islands of Tartaros.  Progression is impeded by barriers that are only removed when all enemies have been defeated, much like Onimusha and Devil May Cry.  The environments are extremely destructible; nearly every column, pillar and even massive platforms can be broken down for loose currency and items.

My complaints with Rygar are few but are worth noting.  While the battle system is dense the enemy roster is small and mostly uninteresting.  In most cases you’ll kill smaller bugs and enemies that are downed in a few hits.   It isn’t until the later stages of the game in between boss fights that you’ll face meatier enemies that will really allow you to explore the ins and outs of each Diskarmor.

Lastly, the game is short.  My first play through was completed in 5 and a half hours.  I’ll freely admit that I am a bit of a gaming ninja but just a little more content would really have placed Rygar in classic status.  There’s a decent amount of unlockables such as art, music, and special diskarmor’s as well as an optional battle arena but not enough that will overcome the game’s brevity.

Rygar is a phenomenally beautiful game and a perfect marriage of technical expertise and art direction.  The boxy environments enable the game to run at a smooth 60 frames per second, a feat you’ll appreciate due to how it allows combat to flow.  There are a number of special effects such as translucent water and reflective floors that at first glance aren’t impressive but when combined with the art are resplendent.  The Greco Roman inspired art litters the environments with crumpled statues, pillars, and other art ripped straight from the history books.  Many of the islands of Argos are truly inspired; the Poseidonia Shrine is jaw droppingly beautiful, with refractive water flowing everywhere that will also cause rainbows occasionally.  The Lions Road in Tartarus with its islands suspended in the air and mountains of floating particles is technically brilliant.

The soundtrack is equally epic in its scope.  Tecmo hired the Moscow International Symphony Orchestra to score the music, something I thought was over the top but I can’t argue with the results.  The lush melodies create the perfect atmosphere for each environment and are excellently composed.  The only blemish in the sound department would be the voice acting; while it isn’t outright terrible it’s incredibly stilted and overblown.

Despite its release in 2002 Rygar is still an enjoyable game today.  Copies of the PS2 version will only set you back a few bucks and there is a Wii port that has some additions but nothing substantial.  Either way Rygar is one of the better action adventure games for the PS2, no small feat considering the breadth of its library.