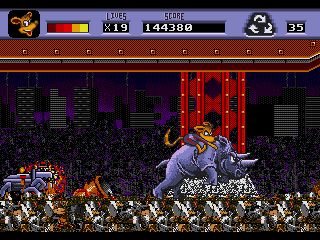 I figure I’ve made fun of it enough that I should give it it’s just due.  Much has been written about Awesome Possum, another contestant in the generic mascot platform wars.  And none of it good.  But on closer inspection is it really as bad as it is portrayed?   Well someone has to put it through its paces and give it a fair chance; it might as well be me.  God help me.

Awesome Possum……Kicks Dr. Machino’s Butt was released in the summer of 1993 by Tengen.  Stop me if you’ve heard this before: An evil scientist is destroying the world with his army of robots and it’s up to our anthropomorphic hero to stop him.  I think there’s another game with the same premise, it rhymes with Tonic.  Anyway beyond the basic premise of the game Awesome Possum bears more than a few similarities to Sonic the Hedgehog except it lacks the care, thought, and polish Sonic Team poured into that classic.  This is the epitome of a copycat rushed to market to try and cash in on a craze.

While the basic premise is the same Awesome Possum has a different focus for the most part.  You are out to save the environment, so instead of rings you collect recyclables.  Your only offensive move is a spin jump that can also double as a means to cruise through the levels.  The game is broken up into 4 worlds with 3 levels each, much like Sonic; damn it I don’t mean to keep referencing it but if the shoe fits…..  In between levels you answer trivia questions about the environment.  As you can see outside of a few touches Tengen might as well have copy and pasted the code from Sonic, at least then the game wouldn’t be so piss poor.  Where do I begin?

Two things will immediately stand out from the onset: the busted controls and the voice acting.  There is no sense of weight to Awesome Possum so he literally flails about, whether it’s jumping or running. Every time you press the controller it’s a roll of the dice whether you’ll accomplish anything or not.  The collision detection is off as well, with enemies requiring a level of precision the game can’t match.  I guess the developers noticed this so they have thrown an inhuman amount of health packs all over the place to compensate but it only makes an already easy game a cake walk.  Most enemies ignore you and the few that don’t are so slow and dim witted it makes no difference.  Throughout all of this you’ll note the sampled speech; Awesome Possum was among a second wave of platformers like Bubsy and Gex that introduced us to the talking asshole.

Its bad enough we had to stare at these smarmy bastards as they waddled through whatever mess of a game their creators shoved them in, now we had to listen to them speak.  Incessantly.  Awesome Possum does not shut up.  He has a smart ass quip for every situation and despite the developers devoting a sizable chunk of the game’s memory to speech it gets repetitive fast.  That also goes for the game’s graphics.  It mimics the structure of, you guessed it, Sonic however it doesn’t vary up the level designs as much so you’ll see the exact same chunks of scenery repeated ad naseum.   The entire game suffers from the lack of a steady frame rate so it stutters at the worst moments.  Bad controls, terrible sound, ugly graphics, it doesn’t get anything right.

So there you have it.  Awesome Possum is lame, lamer than Captain Planet, an achievement which deserves a medal in its own right.  There are zero redeeming qualities about the game and no reason to ever bother.  Let this rot in the mascot graveyard with the other has beens forgotten by time such as Zool and Aero the Acrobat.

…..at least you get to do exactly what the title suggests.