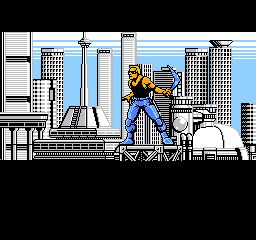 There’s a section of the gaming population that believe everything that comes from Japan is golden and that US publishers can’t do anything right.  These people are idiots.  It wasn’t often during the 8-bit era that an American publisher would take the initiative to drastically improve an otherwise terrible game that had potential.  In the case of Power Blazer we got the better end of the deal.

Power Blade was developed by Natsume and released by Taito in the US in 1991.  It’s the year 2191 and New Earth is run by the Master Computer.  It isn’t long before aliens invade and turn the Computer against humanity.  Chief Security Officer Nova has been tasked with infiltrating the six sectors that block access to the Master Computer and ultimately destroy it.  Things have to be pretty dire if a guy with a fucking boomerang is our best chance to survive.  This is a far cry from the Japanese version, which is essentially a piss poor Mega Man rip off with a boomerang instead of gun.  Taito wisely salvaged the good concepts from that game and created a much better product overall.

Much like Mega Man you have your option of any of six levels however the order does not make a difference; it’s more of a convenience.  The objective of every stage is the same: locate the agent who will grant access to that sector’s database and defeat the boss, granting access to the Master Computer in the end.  The boomerang is versatile, able to be launched in 8 directions but initially weak.  There a host of power-ups that will increase the power, range, and number thrown.

Many of the annoyances of Power Blazer have been thankfully removed: you run much faster, the boomerang is more powerful and can score multiple hits in one go, and the number of power ups has been increased, with the best addition the game’s namesake.  The Power Suit protects you from 3 hits and gives you a ridiculous attack boost.  But these are just the beginning of the game’s changes.

The straightforward levels have been altered to be more open ended, with multiple routes and a maze like structure.  There’s far more chances for exploration and there are suitable rewards for it.  The makeover extends to the graphics, with many of the goofier enemies and bosses removed.  Power Blade has a far more serious tone and benefits from it.

The only downside is that the game was made a bit too easy.  Although the boomerang isn’t too impressive at the start it is a bit overpowered, and that only gets worse the more power-ups you collect.  The bosses are absolute pushovers as well which sucks since that would have slightly redeemed the neutering Taito did.  About the only frustration comes from locating the security room before finding the agent, but that is only a minor annoyance at best.

Power Blade isn’t as popular as it should be considering how good it is.  I can remember the extensive coverage Nintendo Power lavished on it but it seemed to go under the radar.  Don’t make the mistake of avoiding it if you like any of the best classics for the NES since Power Blade has elements of nearly all of them wrapped in a neat package.

Bonus:  For those of you curious about Power Blade’s Japanese counterpart, http://www.ne.jp/asahi/hzk/kommander/rvpblzr.html is a website with a large amount of info and screenshots about the game.  It’s in Japanese but still makes for an interesting comparison.