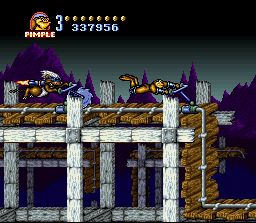 If you look around the internet you’ll read various horror stories of Battletoads, the game that ruined childhoods across the globe.   With its technically proficient graphics and engaging gameplay it stood poised to be a phenomenon like the Ninja Turtles except for one fatal flaw: it was too fucking hard.  I can guarantee 90% of gamers never made it past the Turbo Tunnel, and that’s only the 3rd stage.  For its second go around Rare toned down the difficulty and level count, creating a still hard but doable game in the process.

Battletoads in Battlemaniacs was released by Tradewest in the summer of 1993.  The Toads are in Tibet visiting the Psicone Corporation, who are in the process of testing their new virtual reality system.  No sooner do they start when minions of the Dark Queen, in league with villain Silas Volkmire, steal Zitz and the Psicone CEO’s daughter.   Rash and Pimple follow through the virtual reality portal to rescue their friends.  A much more compact adventure awaits, and while Battlemaniacs can and will bust your balls it never reaches the heights of frustration of the original.

As either Rash or Pimple 6 levels of action await.  The choice is purely cosmetic, with the only difference being the look of their moves.  The trademark exaggerated effects are back and larger than life, with giant anvils, boots, and fists bashing the opposition.  That has always been one of the most enjoyable aspects of the Battletoads games, seeing the ridiculous ways you can stomp enemies and Rare has made it visually pleasing to execute the attacks.   The other factor that works in the game’s favor is the variety.

With the exception of the 2 bonus levels no two stages are similar.  In fact the first level is the only pure side-scroller in the game.  The rest of the game is a roller coaster ride of play mechanics as you descend down the inside of a tree on hover pads, revisit the Turbo Tunnel, catch a ride on some snakes, avoid being sawed in half by a giant rat, and saving the best for last, race Scuzz to the bottom of the Dark Queen’s tower to avoid being blown up.  Some of these are remakes from the first game but they sure as hell didn’t look this good.  That is a bit disappointing but you’ll forget that as you work your way through the game.

While not as hard as the original Battlemaniacs will still kick your ass regularly.  For the most part the controls are tight but there are far too many instances of instant death, leaving most of the game down to trial and error.  That becomes repetitive and boring after awhile since the levels are long and continues are limited, meaning you’ll end up playing each stage way too many times.  It’s asking a lot for gamers to memorize these ridiculous maps:

Damn it Rare, we want to like these games but you make it so hard!

Rare did not slouch when it came to the production values of the series and Battletoads in Battlemaniacs is a powerhouse.  Huge sprites, outlandish effects, and a rocking soundtrack give the game an almost arcade “feel” to it.  The Toads and enemies exhibit a wide range of animations and its obvious the game doesn’t take itself too seriously.  This is definitely up there with the SNES’s finest in terms of visuals.

If only they could have spent less time on the visuals and more on the gameplay this could have been in the console’s top 20. All of the flaws make what would have been a nine out of ten more like an 8.  Don’t let that stop you however; if you can stomach some slight repetition than you’ll have the time of your life.