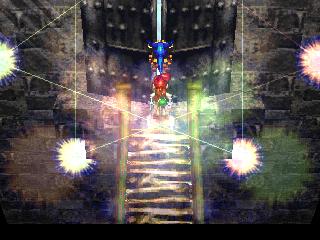 In Japan the dating simulator genre has created some of the best selling franchises in the country, games such as Sakura Taisen and the Tokimeki Memorial series.  While the US has received scant few games in the genre occasionally a few slip the cracks.  The majority of these releases are relegated to the PC but in 1998 Konami took advantage of the new RPG market Final Fantasy VII created and released Azure Dreams.

Azure Dreams was released in 1998 worldwide.  Set in the town of Monsbaiya, this lone desert town prospers solely because of the Monster Tower situated near the village.  The Tower attracts adventurers who in turn sell the goods plumbed from the Tower.  Koh’s father was one such Tamer who unfortunately disappeared 15 years earlier.  Now an adult Koh seeks fame and fortune in the tower as well as clues to his father’s disappearance.  A clever mix of rogue like dungeon exploring with dating sim elements Azure Dreams does not rise above its constituent parts but still remains an enjoyable dungeon crawl for fans of that form of gameplay.

For those familiar with rogue gameplay many of the same staples of that genre apply here.  Floors are randomly generated every time you enter the tower, you lose all levels upon exiting the tower, and regardless of how far in you advance you can only enter the tower with 5 items in your inventory.  Right about now most of you are wondering what the appeal of such punishing restrictions could possibly be and I’m here to tell you.  Although you restart your progress, any monsters you bring into the tower keep their levels.  There are a wide range of familiars you can hatch and carry into the tower, tripling the size of your party.  These monsters can be fused to create even more powerful beasts with new powers.  Ultimately they will be the reason you reach the top and will save your ass in the early stages of the game.

The item limit forces you to make hard decisions about what will be absolutely necessary to progress in the early stages.  The random nature of the tower means you can never truly be prepared for what you’ll face upon entering.  One run you might find complete garbage items that aren’t even worth selling for 6 floors in a row.  The next time you’ll be overwhelmed by the quantity and quality of items laying around.  It becomes a juggling act, taking a risk to ascend higher and find even better quality loot but risking death and losing everything or warping back to town to unload and save your stash but starting over again.  While climbing the tower is the primary goal the other half of the game takes place in town where many of your decisions will impact your progression in the dungeon.

Solving the mystery of the Tower dominates the majority of your game time but advancing the town and gaining a little respect is also key.  Redecorating your house will increase your storage space and the number of additional monsters you can keep.  By using the money found in the tower and selling your loot you can then invest that money into improving the town itself.  The benefits of this are twofold: New shops and distractions become available and the town’s denizens will come to respect you, especially the ladies.  By financing specific buildings in town such as the Hospital or library certain romantic interests become available with different hoops to jump through to win their approval.  Although you can woo all 7 of them you cannot marry any of them and they don’t make a significant impact on the rest of the game itself; it’s simply extra fluff you can pursue if dungeon diving repeatedly is not your cup of tea.

Its individual parts are not fully explored but when combined rise above its slight mediocrity.  Azure Dreams still remains an enjoyable dungeon crawl with enough depth if you choose to pursue it.  This is definitely a departure from the standard Japanese RPG fare and is better for it.