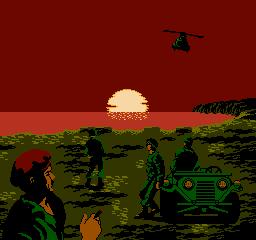 I have a confession to make: I never liked Jackal growing up.   Maybe it was because I always played it multiplayer and back then I was the scrub that held back the team.  But I thought the game sucked.  Looking back at it now and divorcing myself from my childhood memories I can see it for the excellent top down shooter it is.

Jackal was released for the NES in 1988.  Originally released in the arcade as Top Gunner, the Jackal squad is comprised of 4 members tasked with rescuing POWs behind enemy lines.  At the time of its release most top down shooters universally saw you as a lone figure on foot, so Jackal’s relatively speedy jeep was a welcome change of pace.  Whether it’s the home port or arcade original Jackal provides visceral action and in a rare treat the NES version is superior in many ways.

In one or two player simultaneous action the name of the game is the same: destroy buildings to rescue hostages and bring them to designated drop off points in each level to be escorted to safety.  This is easier said than done however as the enemies are out in force.  One hit will destroy you and scatter your hostages, leading to a scramble to pick them back up.  Luckily your jeep is armed to the teeth.  You start out with a machine gun and grenades which can be upgraded to rockets.  The action can get pretty chaotic at times and will force you to exercise caution as you proceed.  You lose all but 4 prisoners upon death, and this will cause you to miss out on many bonuses, such as points for extra lives or better weaponry.  It can be easy to get caught slipping because you move so fast but patience is paramount since there isn’t a time limit.  I would place the difficulty on the same level as Contra but Jackal is more forgiving with its continues and stock of lives thankfully.

For its home debut a number of changes were made that elevate the game above its graphically superior big brother.  Now your jeep only fires north regardless of direction; this sounds like a step back but in actually is a huge boon as it allows you to get to safety and return fire at the same time.  While Top Runner was one long continuous map Jackal has been divided into six stages each with their own theme and boss battle.  It’s a lot more effective at conveying a sense of progress rather than the long straight road full of seemingly random elements that Top Runner provided.

The weapon “system” has also seen some upgrades.  The rockets can be upgraded twice, the first time increases the range of the explosion, the second time it creates a cross shaped bomb of death.  The ability to hold unlimited hostages is another addition; in the arcade you were limited to just 8.  When you really think about it a lot of this stuff should have been in the game to begin with but I guess it’s the type of thing you can only see post mortem.

I recommend Jackal wholeheartedly to any fans of the overhead genre.  It’s been over 20 years but its lost none of its luster.  Excellently paced and with copious amounts of frenetic action, there’s something for any fan of action games in Jackal.