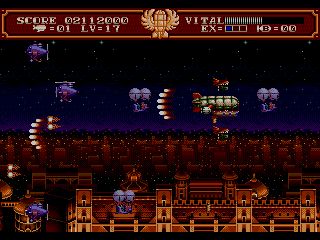 While the modern day shmup has become dominated by bullet hell shooters impenetrable to the average man and loli bait for the otaku, it wasn’t always this way.  Once upon a time there were shmups for everyone, vertical shooters, horizontal shooters, shooters in planes, hell even shooters with witches.  Amidst this flood there was one game that stood out from the crowd due to its unique setting. That game is Steel Empire.

Steel Empire was released by Acclaim/Flying Edge in 1992.  A Japanese import, Steel Empire takes place in an alternate reality 19th Century world during the Age of Steel.  Mammoth flying ships and dirigibles dominate the skies and it’s in this setting that General Styron dominates nearly the entire world.  The only country brave enough to resist his rule are the republic of Silverhead, and with their weapon the “Lightning Bomb” are the only hope for freedom.

Largely influenced by Steam punk Steel Empire is one of only s few shmups to use the steam punk  As such its one.of a kind and uses its setting to great effect to distinguish it from the rest of the shooters of the world.  Much more than just a pretty back drop Steel Empire is an enjoyable shooter on a platform that has more than its fair share and while it won’t have the likes of Lightening Force losing sleep at night it is still a nice alternative for anyone seeking something a little different.

You have your pick of 2 ships: the fast but weak Striker or the more durable and powerful Z-01 Zeppelin.  Each excels in different situations but regardless of your choice you face 7 levels of increasing opposition.  Both ships are equipped with a generous life bar, a rarity in the genre.  It comes down to a choice of maneuverability and low defense or a sturdier ship that lumbers around the screen.  The mission briefings between each level offer slight hints as to what to expect so you can choose based wisely.   Although each mission might be tailored to a particular ship you can still succeed if you’ve grown attached to a specific ship, it just means you’ll have to work harder for it.

Rather than a typical power-up system Steel Empire is distinct.  Your primary and secondary weapons gain experience by collecting experience icons dropped by enemies and will level up, increasing their strength up to 20 times. The standard shooter options are also present, such as the screen clearing Lightning Bombs, speed-ups, and 2 smaller craft that function like options in Gradius.  You certainly are not underpowered for the trials and tribulations ahead.

Although primarily a horizontal shooter the forces of the Silverhead Empire will attack from all sides and the game will scroll in all directions.  Luckily your ship can change direction to attack to the left or right.  The environments range from an abandoned mine to the surface of the moon (yeah they went there!).  There’s a constant onslaught of enemies at all times and sometimes the bullets blend into the backgrounds but nothing too excessive.

For the most part you could say that Steel Empire features standard shooting action but the world it takes place in really elevates the game.  Steam punk is not too common in the gaming space, let alone the shooter genre and one look at Steel Empire’s aesthetics will make you wonder why.  The combination of early 19th century blimps and dirigibles is in stark contrast with the futuristic technology the enemies employ, especially the bosses.   These mechanical monstrosities run the gamut from heavily-armored war trains with multiple points of destructibility to massive destroyable airborne battleships.  The overall illusion of the 1940s setting is achieved through strict adherence to old aircraft design models and a film grain filter applied during the mission briefings.  The setting makes up for the games subdued color scheme, which is heavy on the metallic grays and browns.  Although the game has a lot of visual variety in its ship designs the overall tone is dull.

The challenge is about average overall thanks to the generous life bar.  The levels themselves pose the biggest danger with a never ending onslaught of foes but the bosses are pushovers despite their size.   The briefings before each level clue you in to which ship is best equipped for the coming situation.  There are a few cheap moments during the boss battles where you are placed in extremely tight corners with next to no room, leading to some cheap hits.  If you die a new ship spawns in the same spot, further lessening the challenge.  I guess they didn’t want to make the game too hard so you can appreciate the world because it certainly is beautiful.

It isn’t one of the greatest shooters eve released but if you have even a passing interest in the genre you’ll enjoy Steel Empire.  It was re-released for the Gameboy Advance in 2004 so it shouldn’t be too hard to track down for a reasonable price.