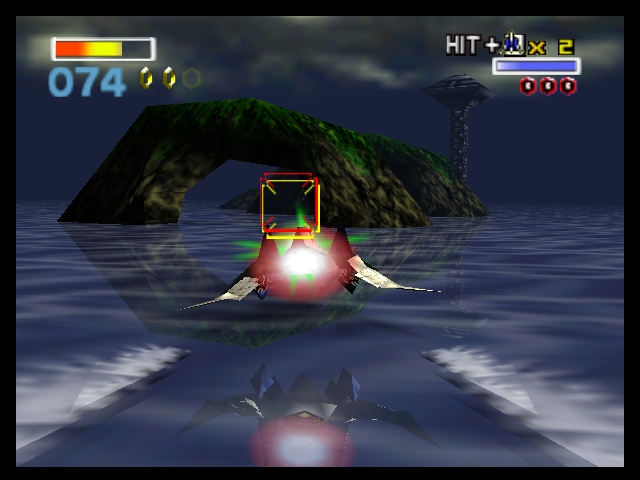 The early months of the Nintendo 64’s life were dark day’s man.  As someone who lived through it, I can tell you the anemic release schedule up until the end of its first year was enough to send most gamers back to their Playstations.  So why did so many of us put up with for so long?  Because the games,when they did come out, were phenomenal, unlike anything else available and generally ground breaking.  One of the brightest stars in the first half of 1997 would be Star Fox 64, heavily delayed but more than worth the wait.

Star Fox 64 was released In June 1997 for the US and Japan.  After the cancellation of Star Fox 2 for SNES many of the concepts and ideas were incorporated into Star Fox 64.  With the added power of the N64 Nintendo were able to take the game even further than what they would have achieved on the aging 16-bit console. Plus by 1995 Star Fox 2 would not have looked so impressive next to Panzer Dragoon.

Evil scientist Andross has attacked the Lylat system, and lacking the resources to stop him on their own, General Pepper has hired the Star Fox team to fight back.  Star Fox 64 aside from being the best game in the series would also introduce Rumble technology to the gaming world, a feature that every console since then has incorporated.  Regardless of the impact the rumble pack had on gaming, Star Fox 64 remains one of the greatest rail shooters ever released.

The name of the game is evolution rather than revolution.  All of the gameplay elements established in Star Fox return but have been given a spit of polish.  There are many more advanced maneuvers to perform in your Arwing aside from barrel rolls, such as somersaults to get behind enemies.  Your shots can lock onto enemies and destroy them in clusters, earning hit bonuses that bring you closer to receiving medals for each stage. The increased focus on the number of enemies shot down goes in hand in hand with other elements of the game I’ll go into shortly.

Your wing men now provide secondary gameplay functions besides getting on your nerves; Slippy will display the boss’s life bar, Peppy will provide gameplay advice and boss strategy, and Falco will open secondary routes through some of the levels.  If they are shot down they are unavailable for one level.  The land master tank and a submarine join the roster of vehicles you can pilot for a nice change of pace.  All-Range mode allows total freedom of movement within a closed environment, with these levels containing the most action packed scenarios, such as an all out brawl against your rivals the Star Wolf team.  This was a feature almost everyone wanted in the first game and it delivers.

There are over 15 levels on the map and unlike the original you don’t choose one of 3 routes to Venom.  Accessing the different planets is achieved in numerous ways: following Falco through a second route through a level, with unique bosses and challenges, reaching a particular hit count on each level or destroy a set number of objects such as gates.  The large amount of levels increases the replay value tremendously since every level has different objectives.  You might be tasked with protecting a base from an alien invasion (in a not so subtle nod to Independence Day) to shooting down missiles before they reach the Great Fox.  The percentage based performance of Star Fox has been replaced with a hit counter that awards silver and gold medals that unlock bonuses in the multiplayer mode.

What could easily have been a throwaway addition to the game actually adds longevity to the title.  Imagine those entire awesome dog fighting scenes from your favorite movies; that’s what you get here.  Available for up to 4 players the arenas are large enough that you can give chase and try to outmaneuver your opponents but at the same time small enough to force confrontation regularly.  The 3 modes, point match, battle royal, and time trial are insanely fun.  By winning medals in single player you will eventually gain access to the Land master and the option to fight on foot.  I freely admit, I wasn’t expecting much from the multiplayer. Initially; we gave it a shot because there wasn’t any other games releasing in the near future that were interesting.  What we didn’t count on was becoming addicted to it for the majority of that summer.

For its time Star Fox 64 was one of the best looking games on the market.  The scale of the levels were simply unmatched back in the day.  With less technical limitations EAD increased the scope of the levels tremendously.  The homage to Independence Day is pulled off beautifully and is only one of a number of levels that are truly memorable.  It isn’t perfect however.  The frame rate nosedives whenever the action becomes too hectic, and some levels are more blurred and dithered than others (Aquas especially), which is a bit disappointing.

What doesn’t disappoint is the ridiculous amount of speech in the game.  For an 8 Megabyte cart this is insane: all dialogue is spoken, and competently too!   There are some nutty bastards out there who will say the mumbles and gurgles of the original Star Fox are better; those people need to be shot.  The music suffers somewhat because of this but that isn’t to say it’s terrible, just that it isn’t on the same level as the graphics and voice acting.

You have branching paths, a robust multiplayer mode, and a truckload of secrets all wrapped up in a single package to create one of the best rail shooters ever made.  Why this genre seems to have died out I don’t know but don’t make the mistake of missing out on this fine shooter.  Star Fox 64 is available on the Wii’s virtual console and a remake for the 3DS is available with improved graphics.  This was one of my most anticipated releases and I’m happy to say it lived up to the hype.