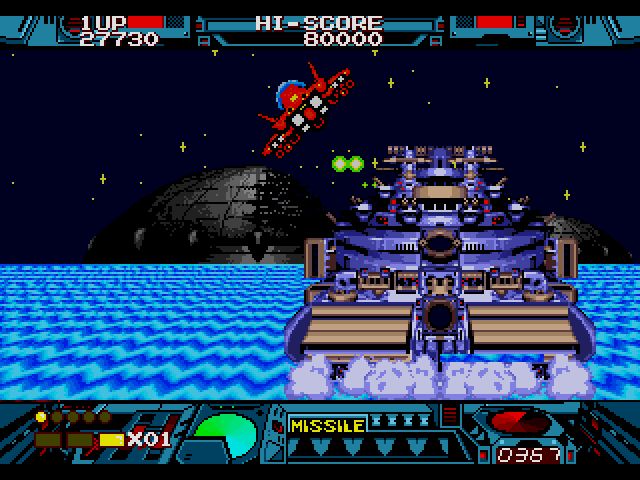 I’m kind of amazed that there weren’t more games that followed in Space Harrier’s footsteps.  Was it a lack of technology?  Or a lack of imagination?  It seems kind of fitting that it would be Namco, Sega’s eternal arcade rival who would put their own unique spin on it.  Although Burning Force has its similarities with Sega’s classic there are enough differences that make it a distinctive experience, one that is at times even better than the game it takes its inspiration from.

Hiromi is a cadet trying to earn her license at the Earth University and it’s up to you to help her complete her final training over the course of six days to become a space fighter.  Yeah that sounds a little bit too close to Sega’s game.  It’s an interesting premise considering most games would have probably taken place after Hiromi became a space harri…fighter.  No that it makes much difference since you would still end up blasting everything in sight.

Although I’ve compared Burning Force to Space Harrier in truth the two games only share a viewpoint.  Hiromi’s training lasts six days with each broken down into 3 stages and a bonus round for points.  Movement is strictly ground based until the third level of each day where you are outfitted with a jet fighter and it truly shows its Space Harrier roots.  The last level of each day (with the exception of day six) is a bonus round filled with point based orbs that will test your flying skills and are your best shot at earning extra lives.

Restricting your movements to either left or right at first sounds limiting but the game’s design takes that into account.  It’s a lot harder to dodge enemy fire since you can only move left or right but at the same time you are given a few different options in that regard.  Outside of some deft bobbing and weaving most projectiles can be destroyed provided you can line up your shots correctly.  If that fails you can adjust your speed to move faster or slower although relying on that kind of split second decision making is ill advised.

Offensively The Genesis version has seen a few upgrades over its arcade counterpart.  The laser, cross laser, and wide beam have all made it intact and are joined by two sets of missiles, homing and max.  Homing missiles are self-explanatory.  Max missiles land directly in front of you and expand outward in a circle, effective for taking out standard enemies but more or less useless against bosses.  Most background elements can be destroyed and will yield green orbs which can be activated for temporary invincibility once you have five.

Compared to the arcade game the Genesis port is slower which in my opinion makes the game more manageable.  Space Harrier 2 bordered on insanity at times due to its rapid pace which lead to many unavoidable deaths.  Not that the Burning Force is a slug in comparison but you can actually see most threats and react to them in comparison to that game.  It’s also easier thanks to the three hit life bar and reduced amount of enemies.  There are stretches with little to no activity which feels odd given how action packed the game is; whether it’s a technical reason or just to give players a reprieve I don’t know but it certainly stands out.

Once you take the controls of the jet fighter you are essentially playing Space Harrier with all that entails.  Moving about the screen can obscure bullets and the lack of a targeting reticle makes lining up shots with enemies harder.  These issues are more pronounced during boss fights as they are more apt to approach the “camera”.  These segments are a welcome change of pace however as the pace of the game is sped up considerably.

Presentation wise Burning Road has turned out much better than the Genesis ports of Space Harrier 2 or Galaxy Force 2.  The scrolling of the playing field is near exact but the scaling on enemies and other objects has taken a hit.  It’s at its most choppy during boss battles as they approach the player or zip into the backgrounds.  Speaking of backgrounds entire chunks of scenery are missing which sucks entirely.  The backdrops in the arcade were pretty exotic and added to the game’s atmosphere including the subtle shifts in the time of day which are missing entirely here.

Six days with multiple levels in each might sound like a long game but in actuality the game is pretty short.  The levels are only a minute or two long and outside of adjusting to the game’s viewpoint it’s a pretty moderate ride.  Considering you can find it for $5 or so I can definitely recommend Burning Force if you are in the market for something a little different in your shooters.