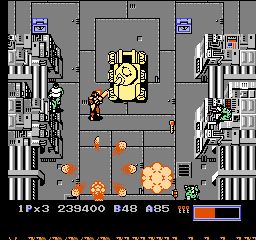 For as much as I can’t seem to get into most multiplayer games of any kind nowadays (it’s me, not the games themselves) I really overdosed on them back in the day.  Contra, Double Dragon, Tecmo Bowl, River City Ransom, I was there.  Data East were never the hot developer of the day as most of their output seemed to be copycats of other properties but they still managed to churn some quality games in their day.  Heavy Barrel was their take on Commando but certainly turned out better than that title and one that is even better in coop.

Terrorists have taken over a nuclear weapons facility prompting the military to send in two soldiers to infiltrate their base and assassinate their leader.  I really just made that bare bones plot sound a lot more epic than it really is.  Honestly Heavy Barrel is Data East’s response to Commando in the same vein as SNK’s Ikari Warriors.  Except Heavy Barrel is actually fun unlike that train wreck.

Although it shares the same top down view as Commando Heavy Barrel is closer in style to the second level of Super C.  There’s a large assortment of weapons at your command such as the spread gun, flamethrower, and the laser.  You have a large amount of grenades that on their own aren’t so great due to their small blast radius but can be upgraded.  There’s also a limited shield power-up that rotates around you and unfortunately leaves gaps in its defense, although the unmotivated soldiers won’t take advantage of that.

Heavy Barrel differs from most games of its ilk by limiting the ammunition for special weapons and keeping all of them locked inside boxes.  The numerous boxes that litter every level can only be unlocked using keys held by certain troops (the red guys).  There are more containers than keys it sucks that you can’t preview what is inside each one before cracking it open.  The contents range from more ammo, grenades, the shield, 1-ups and the most important, pieces of the heavy barrel.

Ah yes, the Heavy Barrel in the title is referring to the best weapon in the game.  The Heavy Barrel is an experimental laser cannon that might as well be called “Holy Shit” because it’s overpowered.  So overpowered in fact that it was broken into six pieces.  Once assembled for the next 30 seconds or so you are practically a walking Jesus on the battlefield, able to destroy any enemy, including bosses, in one shot.  There are enough pieces that you can assemble the Heavy Barrel at least 3 or 4 times during the course of the game.  Two-players both armed with Heavy Barrels is overkill and you’ll clear the screen faster than the game can keep up.

Which does highlight a slight issue I had with the game.  While the NES port is a pretty competent version of the arcade game some concessions had to be made which affects the game’s balance.  Due to technical constraints there are significantly less enemies on screen; so few in fact that the initial first few levels are made easy due to their absence.  It’s kind of sad but even with less enemies there’s still some heavy flicker but nothing anyone who has ever played an NES game hasn’t dealt with.  The challenge doesn’t pick up until the halfway mark at which point they become more aggressive and travel in larger packs.  You’ll also only gather about 2 or 3 keys per level at that point so it feels terrible when you waste them and only receive ammo that isn’t necessary at the time.  Even with the jump in difficulty I found the game pretty easy, especially if you have a competent second player with you.

Heavy Barrel wasn’t a stunning title in the arcade and so its NES counterpart was already at a disadvantage.  There’s a reduced level of detail all around and far fewer enemies attack at once.  Even in spite of that the game still manages to flicker with minimal on screen activity.  I also found the game’s color palette to be fairly garish and off putting at times.  But hey it could be worse, like Ikari Warriors.

Fans of top down shooters will find a solid action title in Heavy Barrel that is better than most of its peers but pales in comparison to the top dogs of the genre on the NES like Guerrilla War.  Don’t let that stop you however as it’s still a fun but brief game regardless.