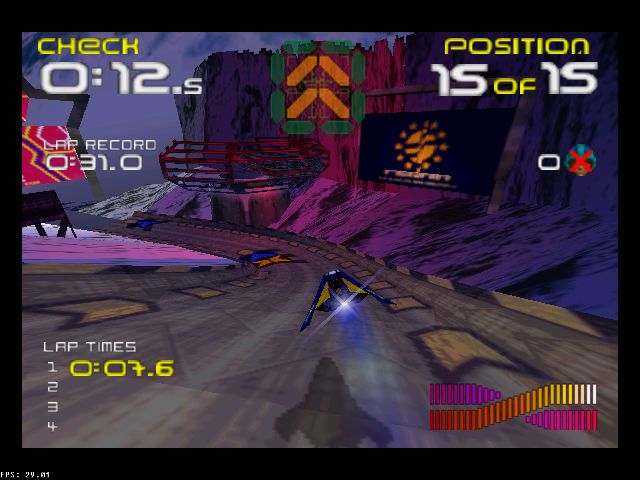 Well this was certainly unexpected.  Psygnosis were the jewel in Sony’s development cap and the key to gaining them respectability as a console manufacturer.  Let’s be honest, Sony Imagesoft sure as hell were not the ones you looked to for quality gaming.  Sometime around 1996 for a brief period Psygnosis regained some of their autonomy and began to develop for the Saturn and N64.  Their version of Wipeout for Sega was pretty astounding considering the gap in both machine’s technical performance.  But it was Wipeout 64 that brought a number of features to the series that would later be iterated on in further installments and managed to stand out as an excellent racer among a sea of mediocre titles.

Though set a year after Wipeout XL this is not a wholly original title.  In truth you could almost even call it Wipeout Remix.  Of the seven tracks available only one is truly original.  The rest are reversed and altered versions of tracks from the first game and its sequel.  For those that truly put hours into both games there might be a sense of familiarity at times but for the most part I can safely say that they largely feel brand new.

Wipeout differentiated itself from F-Zero through its weapons and insane course design, two elements that really stand out in contrast to F-Zero X, its competition at the time.  Making it to the end of each track is about much more than smooth driving skills, you also have to survive to the end against stiff competition and their vicious weapons.  All of the weapons from prior games return with a few changes.  The mines, triple rockets, electro shock (which causes a ship to stall) and the awesome quake disruptor which undulates the track in its path all look spectacular and are highly effective.   Now however each team has an upgraded version of one particular weapon uniquely their own.

The biggest innovation Wipeout 64 brings to the table is analog control.  The dual shock was introduced after the release of Wipeout XL so it couldn’t benefit from the increased finesse the analog stick brought to the table.  Next to the jump to 3d adapting analog controls was the biggest improvement racing games made and Wipeout 64 demonstrates that beautifully.  Leaning into corners and making sharp turns is more precise than grinding your thumb on the horrible PlayStation D-pad.  It’s actually possible to manage without using the air brakes although mastering a combination of the two yields the best results.  The game is exceedingly fast, more so than most other games in the genre but always remains playable; take that Extreme G2.

The game’s single player campaign eschews the traditional Grand Prix in favor of multiple different Challenge modes.  Each series of challenges comes with specific conditions necessary to win. Race is the closest the game comes to a normal grand prix with the condition that you at least place in the top three before moving on.  Time Trial is self-explanatory while the weapon challenges are the most interesting.  These will give you certain tasks such as eliminating a certain number of competitors or destroying the race leader before the final lap.

In spite of the better control setup Wipeout still has a bit of a steep learning curve.  It’s not as brutal as the first game but definitely harder than the far easier XL.  The checkpoints are pretty tight and even though you can graze walls and the sides of the tracks without coming to a complete stop it still takes a toll by draining your energy bar.  The AI cars are not shy about using weapons so don’t be surprised if you die before completing the first lap a few times.  It really puts the challenge in Challenge mode.

Completing the challenges is the only way to earn access to the different teams and their cars, the final track and the super weapons.  It’s in this area that Wipeout 64 comes up short when compared to F-Zero X.  The 4 teams each have their own unique cars with individual strengths and weaknesses for a lot of variety.  However F-Zero has 30 to choose from.  There are only seven tracks total which is miniscule considering F-Zero X has close to 30 and a random track generator.  Of course the tracks in that game have nothing on the complex layouts Psygnosis has created here.  There’s something to be said about quality over quantity.

Wipeout 64 compare favorably to the amazing Wipeout XL and betters it in a few categories.  Thanks to the N64s strengths it produces a cleaner image free of pixelization and the texture warping prevalent in so many PlayStation games.  The lighting effects aren’t as pronounced as a tradeoff and are sorely missed.  There’s still some pop-up but the tracks are designed so that it hides it a good portion of the time.  The framerate holds up pretty well except for four player races where it takes a hit.  The awesome techno soundtrack that the series pioneered has been brought over successfully; obviously it doesn’t sound as good as CD audio but the tunes are better than they have any right to be considering the hardware’s deficiencies in that area.

Wipeout 64 turned out better than even the staunchest critics could have imagined and remains one of the better racing games available for the N64; no small feat considering there are close to 50 of the bastards in its library.  Fans of the series get another strong entry in a fantastic franchise while racing game fans are treated to an excellent game.