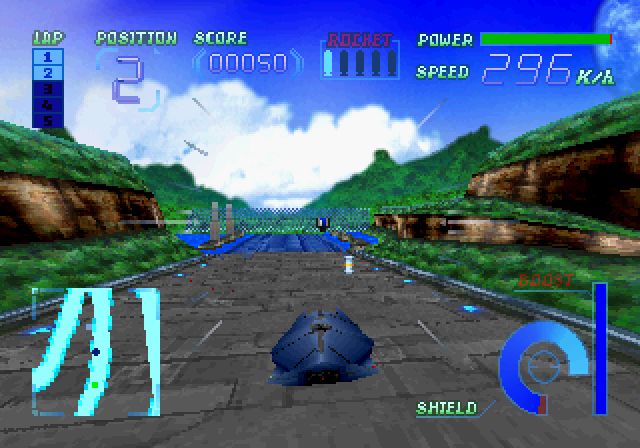 Sega’s racing game history in arcades probably stretches back farther than anyone with the likes of Outrun and Hang-On putting them on the map.  They were even one of the pioneers in pushing 3d with Virtua Racing and Virtua Fighter.  Their original home efforts usually didn’t receive as much fanfare. While everyone remembers Daytona and Sega Rally next to no one ever mentions Cyber Speedway (known as Gran Chaser in Japan), an early Saturn effort from the creators of Ranger-X that could be viewed as the Sega equivalent of Wipeout (before they got a version of Wipeout themselves) minus that game’s quality although it is a semi-competent game in itself.

In the future alien planets across the galaxy have decided to end all hostilities, instead airing out their grievances in the intergalactic Cyber Race tournament.  With planet Earth at “war” with Kaladasia it falls on your shoulders to represent Earth in the CR tournament and win for the sake of peace.

I’ll say right now that the story is the highest grade of cheese.  Told through cutscenes in between each race your character is the unlikely hope of humanity as he competes against rivals from each planet the Cyber Race stops.  These cutscenes, if you can call them that, are just a series of pixelly still images with hilariously bad voice acting.  Even worse than the extreme grain in the backdrops are the cut and paste character portraits layered on top of them; it’s as if someone who had just received photoshop created them with their jagged edges.

Outside of the story what about the rest of the game?  Story mode consists of five races across numerous planets.  In Standard Mode you only have to place in the top three to move on while those seeking a challenge can try Advanced where it’s come in first or go home.  With 5 continues per each leg of the tourney only the most terrible drivers won’t be able to complete the game.

Rather than cars you control sleds and all that entails.  Each planet has a unique sled with all possessing unique properties in terms of handling, speed, acceleration, cornering and such.  Aside from each crafts’s characteristics you have a number of factors you can alter prior to each race like Wave Race 64. The engine can be tuned for power or speed, steering can be adjusted to light or heavy and the pressure of the brakes can be tuned.  For those that are unsure you can leave it at neutral which at the bare minimum is workable.  The terrain of each planet poses its own challenges so tailoring your craft appropriately can yield fantastic results when done properly.

Once you hit the track the controls aren’t perfect but manageable.  Regardless of how you’ve tricked out your sled relying on the normal brakes to power through corners is useless and the Ridge Racer school of power drifting does not exist in this game.  The air brakes will be your life line as they enable sharp, almost 90 degree turns.  Most of the tracks don’t have much in the way of really out there corkscrews and curves but considering the number of drone cars littering the track who absolutely love to ram you the air brakes are needed.  The focus is largely placed on avoiding the many obstacles that populate each track such as the large icicles of Glacies or the random fireballs of Evoflammas.  There are rockets you can use to destroy some of these as well as temporarily stop other sleds but actually hitting anything with these is a pain in the ass due to the erratic frame rate.

The functional controls are almost ruined by the game’s inconsistent frame rate however.  When you are alone or only facing one competitor it seems fine but once 3 or more cars are on screen the game starts to stutter and screw up your timing.  The “jumpiness” is noticeable and can lead to slamming into walls at the worst moments.  Each race is 5 laps long and can feel excruciatingly long and its nerve wracking to feel as though your hard earned first place run can be lost at a moment’s notice because the game can’t keep up.

From a graphics standpoint Cyber Speedway has its moments but lacks the graphical polish and flair of Wipeout.  Famed artist Syd Mead as the visual lead and his artistic touch is evident in the design of each world.  The sleds themselves are sleek and futuristic and designed in such a way that a minimum number of polygons were used in their creation and they still look great.  The worlds themselves are full of pretty artsy elements such as the dragons and centipedes of the sky planet or the icy stalactites of Glacius.  However the game lacks the lighting effects and especially the awesome transparencies in Wipeout and it shows.  The ugly morai pattern used in Saturn games in place of true transparency is ugly and sticks out many tracks.  There’s some nasty pop-up on many of the tracks although it isn’t Daytona USA bad.  I found the game’s soundtrack to be pretty bad; it tests your patience for butt rock and is really inappropriate.

The unreliable framerate hampers the games controls but even then I’m sure most will have completed the story mode in one sitting.  Outside of Time Trials and multiplayer Cyber Speedway has no unlockable content, meaning you’ll have seen everything it has to offer in about two hours.  With better racing games on the market (and same platform) I can’t really recommend it no matter how much I wanted to like it.