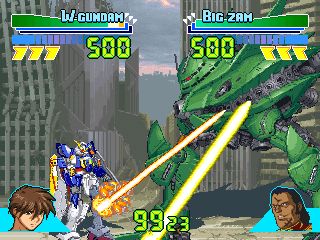 In Japan Gundam is an institution.  Bandai has set up an entire cottage industry of goods based around the franchise that caters to all needs and hobbies including manga, anime, model kits and of course games.  There have been hundreds of Gundam games spanning the last 3 decades however the US has seen a little more than a handful of these titles.  Truth be told we’re not missing much in a good 80% of these cases however there has been the occasional gem, usually when Bandai teams up with a respectable developer like Namco or Capcom.  The Gundam Battle Master Series finally saw a release in the US in the waning years of the PlayStation and were interesting takes on the fighting genre.  They are far from perfect but do a suitable job of capturing the feel of what a robot fighting game should be.

What America would eventually receive is actually the second game in the series as the first was too old.  Gundam Wing took the US by storm as the first in the series officially released here and so Gundam the Battle Master 2 was retooled to appeal to that fan base.  The changes are fairly insignificant; the Zeon’s Hamma Hamma suit is replaced by Heero Yuy’s Wing Gundam which has taken center stage in the game’s marketing.  The mobile suit pilots have been changed to feature a well-rounded cast from most of the more popular Gundam series, which is nice bit of fan service for those who can appreciate it.

The game’s plot focuses on Heero’s quest to destroy all mobile suits and end war on Earth which kind of makes him out to be an asshole in a few cases.  The cast is mostly comprised of characters from the Universal Century timeline with many a fan favorite such as Char Aznable, Judau Ashta, and Haman Karn.  This does create plot confusion at points as the characters will refer to Newtypes and the Zeon, which do not exist in the Gundam Wing universe.  But that’s all nerd wankery.  In the game’s single player mode you have to play as Heero but are free to pilot any mobile suit while multiplayer has no such restrictions.

This is not a straightforward Street Fighter clone like the Super Famicom’s Endless Wing; instead the game cobbles together features from a variety of games to become its own beast.  The traditional 3-round structure is absent; instead battles follow the Killer Instinct model.  You are equipped with three life bars which causes an overheat when one is depleted and the fight continues right after.

The game uses a Children of the Atom style two screen high playing field.  One to take advantage of each suit’s super jump/temporary flight capabilities but second because the mechs are huge! The mobile suits come in all shapes and sizes from the  gigantic beyond screen filling Big Zam to the smaller (and annoying) Acguy.   I can’t think of any other 2d fighting game with sprites this huge and trust me they are a sight to behold.

The size of the combatants does come at the expense of the game’s speed.  All mobile suits are slow and clunky in their movements, which I guess is realistic but not as satisfying in motion.  To combat this you can fly using your thrusters for brief periods as long as you have boost which the larger playing field accommodates.  You can also execute a forward dash for quick step rushdowns.

Due to the game’s slower pace you won’t be executing 6 or 7 hit combos.  In most cases nailing a 2 in one or 3-hit combo is less common.  The fighting engine is more about using your defensive options when necessary and moving in for the attack once your opponent is exposed and less about spamming fireballs and special moves.  Many of the game’s systems are set up to avoid this as a matter of fact.  Projectiles are limited by ammunition and are largely unblockable.  However you can sidestep like in the King of Fighters.  Melee weapons like the beam saber can only be dodged or blocked using your temporary barrier but these drain precious health.  In essence once you’ve practiced a bit it’s an effective if not thrilling system.  Imagine Capcom’s versus series with giant robots and slowed down from its breakneck pace.

For many the game’s slow speed is a deal breaker as you’ll want to approach it like any traditional hand drawn fighting game.  While I’ve grown to appreciate the game on its own merits the sluggish pace won’t win any fans.  As hard as it is to believe this is a more technical brawler where you pick and choose your hits like Virtua Fighter (except not as punishing).  It also suffers from a lack of content.  The likes of Namco had spoiled gamers with the excessive amount of additional modes and content added to their home ports and so Gundam’s story and versus mode seem weak in comparison.  This was a game from almost 3 years prior however and sold for $10 so it at least had that working in its favor.

Gundam the Battle Master is a phenomenal looking game even in 2013 due to its animation and art.  Segmented sprites were used heavily in the 16-bit era, most notably by Treasure.  It didn’t work for humans because the animation style was robotic; look at Earnest Evans to see how that worked out.  However for giant robots it’s perfect.  Animating each individual part of the Mobile Suits separately allowed the developers to bypass the PlayStation’s RAM limits for smooth animation and larger than normal sprites.  The Big Zam is so large it doesn’t fit can’t fit on the screen while the smaller Gundams are nearly the size of the screen.  It’s heavily pixelated at times but the tradeoff is worth it for this level of 2d splendor.

At the end of the day this is a solid brawler that lacks the depth of the standard bearers of the genre.  Its far better than the vast majority of Gundam games that have ever been released and is entertaining enough to last a few hours while you gawk at the visuals.  Serious fighting fans however should look elsewhere.