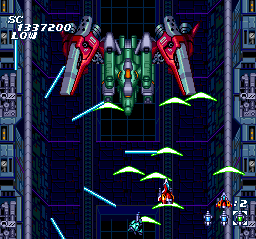 All good things must come to an end and so Hudson decided to end the Star Soldier series with a bang, at least for that generation of consoles.  The last 16-bit installment in the series, Soldier Blade, is one of its strongest entries before the series would see a dip in quality as it experimented with 3d.  Rather than basing itself around a gimmicky new power-up system Soldier Blade excels by offering a kick ass shooting experience from start to finish and is one of the strongest shmups in the console’s library.

In the 21st century Earth’s resources are drying up, prompting the need to explore space for more.  A Warp Drive gate is developed to send multiple spaceships to distant corners of the galaxy but 4 months after it is used it ends in disaster.  The research team sent to other solar systems returns battered with the Zeograd army hot on their heels.  It isn’t long before the Warp Drive is commandeered, and all hope is lost until a lone scientist develops the Soldier Blade space fighter to combat this threat.

Compared to most other Turbo Grafx shooters Soldier Blade’s weapons are a bit understated.  There are only three, a Green Wave beam, Blue laser, and the Red standard shot, all of which can be upgraded by collecting multiples of the same color.  As an added bonus you are gifted with a smaller satellite that mimics your movements and attack like an option.  Though small in number these weapons make up for it in convenience, especially at higher power levels.  Beyond their added power it also functions as a life bar; taking hits will only downgrade your weapon until it reaches its basic level before death.  In my opinion it helps make the game far more accessible to novice shooter fans, something this genre isn’t known for.

The true depth of the weapons and what takes it a step beyond Super Star Soldier however comes in caching for future use.  You can keep three weapons in reserve although you can’t switch freely through traditional means.  Instead you have the option to turn your current weapon into a super bomb of sorts, sacrificing it for a massive temporary boost in power.  The means of attack differs depending on the weapon, with the laser creating a wide concentrated blast and the wave beam turning into an aggressive homing bomb.  Although weapons are in plentiful supply you have to exercise some level of thought as picking up any new weapon puts the current one in reserve.

While it wasn’t developed by Compile Soldier Blade is very similar to some of their works, most notably Blazing Lazers.  As a vertical shooter Soldier Blade is extremely fast, almost to the game’s detriment.  There are only two speed options, low and high and even on the low setting your ship moves briskly.  The speed is necessary as enemies have a tendency to pop in from all corners of the screen with guns blazing.  You’ll appreciate your maneuverability when the screen is filled with numerous mechs and a ton of projectiles with nary a hint of slowdown.

While the screen has a tendency to become cluttered with bullets the game actually throws a hefty number of large mechs in rapid succession.  I can’t think of any other shooter from that era that does so with such aplomb, almost as if the designers were a bit too proud of their mechanical designs.  Not that it’s a bad thing; anything to distinguish a game in a crowded field is welcome.  The bosses are colossal in scale, with some lasting almost the entire length of the levels themselves.  Breaking them apart piece by piece only to see them dredge up more armaments to keep the fight going is exhilarating in a way only shooters can provide.

With its generous power-ups, infinite continues, and instant respawning Soldier Blade, although it providing a median challenge is not the longest ride.  Chances are you’ll finish it in an hour or two.  Completing the game on higher difficulty settings reveals more of the ending and the game has a two and five minute score attack mode, remnants of its festival heritage.

While it isn’t the flashiest shmup available for the console Soldier Blade is one of the most consistent and entertaining.  Its numerous options and systems also make it one of the most accessible for casual fans of the genre and with its cheap price on the digital download services is one to watch out for.