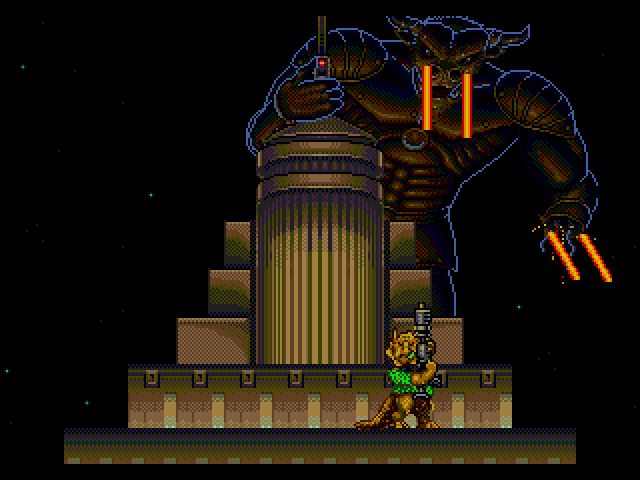 Dinosaurs for Hire? Sure why not? We have Turtles that are ninjas and toads that love to battle so mercenary alien dinosaurs aren’t too far-fetched. It would be easy to lump this in the same category as Battletoads, the Street Sharks, and Biker Mice from Mars but DFH predates all those by almost a decade in some cases. All jokes aside my knowledge of the original comics from Eternity and Malibu is spotty at best but what I remember is a comic that didn’t take itself too seriously despite its premise and actually poked fun at its many contemporaries. The game goes in the opposite direction and plays it relatively straight. While the humor of the comic is only present in small doses that is a minor complaint as I’m sure 90% of those who will eventually play aren’t even aware of the comic’s existence. Luckily the game is enjoyable on its own merits.

The Dinosaurs for Hire as the title suggests are Archie, Reese, and Lorenzo, a tyrannosaurus, stegosaurus, and triceratops respectively. Although they look identical to our prehistoric beasts they are actually aliens who happen to resemble dinosaurs. Along with pterodactyl pal Cyrano the quartet moonlight as guns for hire to pay the bills since they are stranded on Earth. There is no story presented in the game but it doesn’t need one to give you an excuse to kill an army of mutants and ninjas. So, so many ninjas.

Of the few games based on Malibu Comics properties Dinosaurs for Hire is undoubtedly the best. Ex-Mutants is just a terrible game from start to finish and Prime never rose above being a mediocre side scrolling brawler. Dinosaurs for Hire is solid in part because the comic has the perfect setup to send them out on missions of destruction. Make no mistake, Konami and Treasure were not lying awake at night worried that Dinosaurs for Hire was about to steal their lunch. But the game is more than worthy enough to occupy your time after you are done with those developer’s classics.

All three characters play identically with the exception of their melee attack which is a slight disappointment. Weapon selection is surprisingly light with your only options being a spread shot, exploding shots, or a devastating combination of both. Melee attacks are for enemies that get in too close but is problematic. Most enemies (humans or ninjas) are a lot shorter than your dino and so the attack will miss as they run past you in groups. I mean yay for accuracy but it is frustrating as hell to see a virtual midget run under the butt of your gun and pelt you in the shins repeatedly.

Despite what the game’s box art suggests this isn’t actually a nonstop action extravaganza. Most levels are actually fairly quiet with few enemy encounters as you work your way to the exit. While most stages tend to be pretty straightforward and short there are a number such as the dam and toy factory that are large and confusing in their layout. With no guidance it is easy to get lost or accidentally die falling into some hazard that looked like a platform. Where the game’s individual stages run hot and cold the boss battles are always a delight as you will often face off against multi story mutants and robots that need to be taken apart piece by piece.

Overall the difficulty is fairly median. There are many instances where you’ll take shots from off screen enemies or turrets but the game is balanced so that life restoring food is usually close by, even during some boss battles. The confusing level design will lead to some wasted lives but you can set the number of lives and continues in the options menu to offset that. The boss battles can be particularly brutal, especially if you die since you are stripped of all weapons. It can be a tall order to take down some of the more aggressive mayors in the game with nothing but the standard machine gun but even in light of that I doubt most will have trouble completing the game in one afternoon.

In terms of graphics the game comes across average. The game has a very grainy look to it overall which helps with certain environments such as the graffiti covered subway and dark toy factory. But once you are outdoors it tends to look like a first generation game. The sprites are incredibly large, especially the screen filling bosses but the animation is pretty poor. By 1993 when this was released the Genesis was on a roll with titles like Shinobi 3, Ranger-X, Eternal Champions, and Gunstar Heroes pushing the system hard. Dinosaurs for Hire looked out of place in Sega of America’s lineup by comparison. Luckily the gameplay carried it.

The game has its fair share of problems but nothing so bad that it should be avoided. This is a solid action game in the Contra mold that can be found dirt cheap. At that price it is more than worth your time.