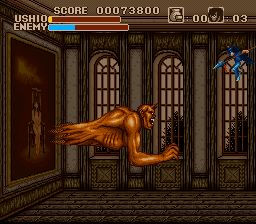 Darker themed SNES games were not as plentiful as on the Genesis but generally speaking for the most part they were all good. There are many import gems waiting to be discovered such as King of Demons and Jaki Crush but not everything can rise to that level. Ushio to Tora is based on the shonen manga of the same name and does a good job of using the events of the series as the basis for the game’s levels. That would be well and good if the game were not flawed on a basic level. While I’m sure some will be able to overlook its problems ultimately the game can be a frustrating experience that is on the cusp of greatness.

Ushio unknowingly released the demon Tora when he pulled the Beast Spear from its resting place. Unfortunately Tora’s awakening begins to attract more and more wandering demons, forcing the two into an uneasy alliance. The game does not follow the overall plot of the manga but does incorporate many of its more popular battles as boss battles. That faithfulness is both the game’s strength and weakness; adapting some of the best moments from the manga allows for epic encounters but there is little outside of that to make this a fulfilling experience.

Both Ushio and Tora are selectable as playable characters and have their own individual quirks. Ushio is armed with the Beast spear and as such has an extremely long range. He also has a useful double jump; technically both characters can reach the same height but being able to delay that second ascent is extremely useful. Sadly while I wish I could say Tora is awesome (I mean he’s a giant tiger demon for god’s sake!) he is simply not as well rounded as Ushio. Tora’s claws have a very short range which, when tied in with the game’s bad hit detection, makes using him aggravating. By crouching you can charge up a bolt of lightning but the range is also short and trying to time it to hit any target is just, no.

While I wish I could say the game is much simpler using Ushio that simply isn’t true. The hit detection is spotty which can lead to some of the more aggressive lesser enemies decimating your life bar quickly as you flail about helpless. Trying to line up attacks is not easy; the overhead slash has the best range but can be finicky to activate. The arc of Tora’s slashes helps but you still have to be within melee range for it to work.

However ultimately what kind of saves the game is the fact that this is more of an extended boss rush rather than a standard platformer and as such you won’t have to deal with the bad hit detection so much. Much like Treasure’s Alien Soldier the game simply moves from one boss battle to the next with only a few stages featuring fodder enemies to destroy before moving on to the next outlandish creature. In fact more than a few levels consist of only a single encounter!

With such a large focus on battling greater demons one would hope that the game would have an assortment of epic encounters to test your skills and to an extent it delivers. You’ll face an interesting assortment of yōkai, from a large green demon riding on the back of an airliner to one that even inhabits a painting. The human monks and priests you face are an aggressive bunch with a variety of attacks that make them more dangerous than the larger beasts you’ll face. If you were armed with a better arsenal of attacks you could actually look forward to these encounters and form actual strategies rather than simply trading blows.

This is not an easy game by any stretch but you can cheese your way through it in a couple of ways. Since you instantly respawn upon death you can zerg rush your way through most encounters. More importantly a few bosses have projectiles that you can destroy for life restoring food, strength boosting potions and best of all extra lives. Since there is no time limit you can stack items provided you survive that long of course. Unfortunately it makes an already short game breeze by even quicker.

From a graphics standpoint there is plenty to like. Although the “levels” are brief each background is incredibly detailed. The game makes only slight use of special effects such as Mode 7 and relies more on its art direction to impress. The bosses are all large and sport creative designs although they are not the best animated. It is interesting to note that Ushio resembles Yuusuke from Yu Yu Hakusho after a certain point in that series (I’m avoiding spoilers) although to be fair this series came first.  To be fair this was an early SNES release and so it does not compare to later games on the system but still looks decent.  The soundtrack unfortunately is completely forgettable although the fact that the levels are so short means any given track would have to be quick and to the point.

Ushio to Tora has its problems but I can say I at least enjoyed the time I spent with it. Honestly I don’t know if everyone can overlook its issues like I can which is what makes it so frustrating. With a few simple tweaks this could have been a great game instead of one that I have some trepidation recommending.