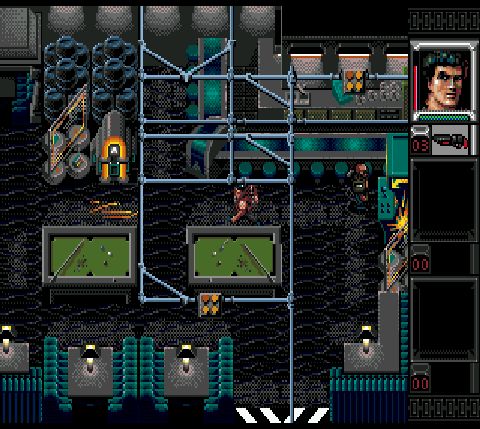 Of all the settings that I have experienced the Shadowrun universe ranks among my favorite.  Something about the cyberpunk setting and mix of future technology captured my imagination like nothing else when I first became aware of it in 1993.  This made it optimal for use in the videogame space and in the 90s Sega and Data East responded in kind.

Developed by Blue Sky Software for Sega this version of Shadowrun was released in the fall of 1994.  Unlike the pseudo PC adventure that comprised the SNES game this version stuck more closely to the source material, weaving nearly all of the major elements of the fiction into the game.  As Joshua you are on a mission of revenge.  After viewing your brother’s death on the news you spend your last bit of cash to visit his last known transaction, setting in motion a string of events that will eventually lead to saving the world from an ancient evil.  In many ways this version of Shadowrun is a top down Grand Theft Auto years before that game existed.  For fans of the Shadowrun mythos everything they love about the pen and paper RPG is represented in some form, and for RPG fans a hard but satisfying quest awaits.

The 3 character classes, Street Samurai, Decker, or Mage specialize in a specific field although it doesn’t mean they won’t be able to utilize the skills of the others.  I say this for one reason: with enough karma points you can build your skills in the necessary fields to become just as adept in a matter of time.  Distributing your karma points in the 20 or so skills will allow you to tailor your character however you want, to a ridiculous degree.  You can completely circumvent the limitations of your class with enough points, becoming a weak combatant with excellent negotiation skills or even laser focus in one area.  It’s a pretty comprehensive list that covers nearly every facet of the game, from individual areas such as SMG or throwing skills to electronics, computers, and even reputation.  Nearly every skill has a tangible and immediate impact on your performance which makes the choices even harder.

Some thought needs to taken into consideration since you cannot respec and the amount of karma needed to raise your skills increases.  It’s entirely possible to screw up, raising skills that aren’t necessary for your immediate task and forcing you to spend large amounts of time grinding repetitive quests for karma.  To offset this you have the option of hiring 2 additional runners at any time, temporarily or permanent and can make use of their skills in a necessary field if you find yourself lacking.

Aside from retrieving your brother’s stuff you have unbridled freedom to explore almost any one of Seattle’s numerous districts as long as you have money for the trip; sometimes a little too much freedom to be honest.  Despite giving you clues as to how to advance the story, you can complete many of the events out of order.  The only things stopping you the majority of the time are money and equipment and it is here where the game’s many different options to gain both opens up.

The runs you receive are where the comparisons to Grand Theft Auto begin.  Scattered around the world are Johnsons who will offer you work for nuyen and karma, with the amount differing based on the difficulty of the run and your own charisma.  Johnsons also offer contacts who can offer you many illegal upgrades not sold in the streets.  Shadowruns fall into many categories, escort, retrieval, data theft, ghoul runs, etc.  You aren’t tied to any one Johnson and can leave to find work with someone else at any time.   The money offered loosely gives you an idea how much you should advance your character before attempting the job.  These runs are where the meat of the game occurs.

In the beginning the runs start out simple enough.  Escort a client here, deliver a package there.  You’ll need the money so you’ll bear the tedium.   In short order you’ll want to tackle the larger runs where the real cash can be found.  Ghoul runs offer decent money for a large number of kills. Corporate runs will make the hairs on your neck stand on end as you move from room to room in search of your objective.  Matrix runs could have been a separate game entirely in terms of the options and depth involved.  The higher the reward the tougher the job in most cases but with few exceptions anything beyond simple escorting will present a challenge.  There is very little middle ground; go big or go home more or less.

Your attributes govern success or failure in fields such as aiming, manipulating computers or even negotiating payments.  The effects of these have a tangible impact on the game, with mag locks opening almost immediately with a high enough skill or your shots missing less.  There are tons of random events that crop up that can be beneficial or harmful.  These range from someone needing help, Lone Star accosting you, to the run specific events.  How you react when they happen will have an effect on the outcome.  Sometimes you’ll get away none the worse for wear; other times it’s an ambush leading to an all out brawl.  If you’re negotiation skill is high enough, you can bullshit your way out of it.  The corporate runs prove the most harrowing, where nearly everything that can go wrong happening if you are unlucky.  These prove the biggest test of your preparation.

The many ways to tackle these and every other situation produce the best moments in the game.  Just as an example:  you are in the Renraku building and are stopped by a company man.  You can try to cover up and avoid eye contact, yell at him, or make up a fake story.  If your charisma is high enough, not only will he ignore you, he might believe your fake story and actually tell you what floor your objective is.  My favorites are the security tiles you step on.  If you spend too much time reading the description the game will inform you that you took too long and tripped the alarm.  Finding the easiest runs that offer the most money will make you feel godlike when you reach the point you can breeze through them.  By the midpoint of the game my tricked out Street Samurai was able to enter any corporate office, hack the security cameras, open every mag lock on the first try and complete the mission without any conflict whatsoever.  That is the epitome of bad ass.

My biggest issue is that the game as a whole is very difficult. The beginning stages are extremely grind heavy as you work for little money and have to spend most of it buying more clips or resting to restore health.  I’ m talking 40 to 50 nuyen per run whereas most decent weapons or armor are in the thousands.  Because equipment upgrades tend to be very expensive you’ll spend hours repeating the same boring quests.  The shadowruns that offer decent amounts of money will require decent equipment before you can even dream of completing them.  Even when you are relatively maxed out all it takes is one random hell hound attack to leave you dead.  Luckily there are so many ways to make nuyen that you can avoid a lot of this stress but only if you are prepared to grind a bit.

Also, and this might just be me, the story can be obtuse and hard to follow.  You are only given basic directions where to go in most cases and as I mentioned earlier can complete them out of sequence.  This wouldn’t be a problem if certain story events were not designed for you to tackle later on when you have had the chance to power up, so to speak.  Because you might not know any better you could lose progress and money by dying needlessly.  Which is soul crushing as the game is extremely difficult.

It can be daunting in the early stages but the game is so good it will hook you.  You won’t care about the grind as you immerse yourself in the world.  This version sticks to the pen and paper rules of the fiction closely and benefits from it.  With a world as ripe as the Shadowrun has become it’s a damn shame that there haven’t been more games in the series.  But due to the magic of Kickstarter fans have another adventure to look forward to.  In the meantime I recommend a trip down memory lane with this classic.