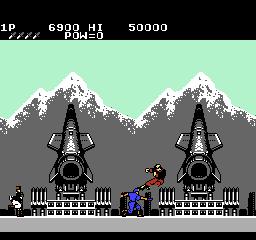 What a clever title.  I was perhaps a little too young to realize what the title of the game implied at the time but even then I thought it was awesome.  About the only thing I knew of the Cold War came from Rocky IV, where Sylvester Stallone, armed only with his 2 fists and slurred speech single-handedly repaired the relationship between Russia and the US with boxing.   You could almost view Rush ‘N Attack as Cold War propaganda but somehow I’d like to believe Konami were above that sort of thing. Originally released as an arcade game the NES port was enhanced and makes for a good and challenging experience.

You are a serial killer dropped in Russia and tasked with killing your way across the Kremlin with nothing but a knife and terrifying Russia into world peace.  Alright I made that up but can you imagine how much more awesome the game would be if that were the premise? You are dropped behind enemy lines but the mission is to destroy their special weapon.  I still prefer my version of events, its totally makes the premise of 1 man against an army more palatable.  With knife in tow the game begins.

I’m so bad ass I stabbed like 4 guys in 1 thrust!  You see that last screenshot?  That was taken seconds before the sniper was stabbed in the EYE.

Get used to the knife as it’s the only weapon available for 90% of the game.   But boy is it effective!   If you can see it you can stab it.  Wolves?  Stab.  Snipers?  Stab.  All must fall before your superior knifing technique.  Stabbing is your business and business is good.  And the game throws an ample supply of enemies to make with the stabbing.  Certain enemies on every level will either drop a rocket launcher with finite ammo or a hand gun with an unlimited supply that only lasts brief periods.  Very rarely will the Star drop, which grants invincibility and is your cue to go buck wild on the enemy forces in one of the few times the game lives up to its title.

For a game that suggests you rush in and stab people in the face that course of action is ill advised.  Enemy soldiers come in 3 or 4 types: the standard brainless soldiers that rush (heh) you, the jump kicking bad asses, the sissy soldiers with a gun who take one shot and run away, and the occasional sniper and such.  It’s relatively simple but the odd combinations thrown at you do serve to up the tension.  Because you have to rely on your knife’s short range most of the time every encounter is potentially fatal.  The end of every level features a gauntlet against a new type of foe such as wolves or men with rocket packs.  The controls are pretty tight but do take some getting used to.  For some reason you press up to jump, with button A unused unless you have a secondary weapon.  I’ve never gotten used to that in the almost 30 years I’ve been gaming and I’m glad that it’s a relic of the past.

The NES version features a number of improvements over the arcade game.  First of all it actually has music.  The drums that were used in the arcade machine were far too subtle and dare I say it ambient for such a violent game.  The focus on rescuing hostages was completely scrapped in favor of simply reaching the end of each level and surviving.  The flame thrower was removed in favor of the handgun and star which I find strange; why not keep all of it?  Most importantly 2 more levels were added along with 2-player coop.  I have terrible memories of trying to complete the game coop; back then I was the scrubby little brother that kept screwing up.  At least you respawn immediately, unlike in single player where you are thrown back to a checkpoint.

Rush ‘N Attack is a moderately challenging game that will keep you occupied for a decent amount of time and is also one of the earliest NES games that has held up today. It doesn’t reinvent the action genre but doesn’t have to; it succeeds by being an enjoyable game.