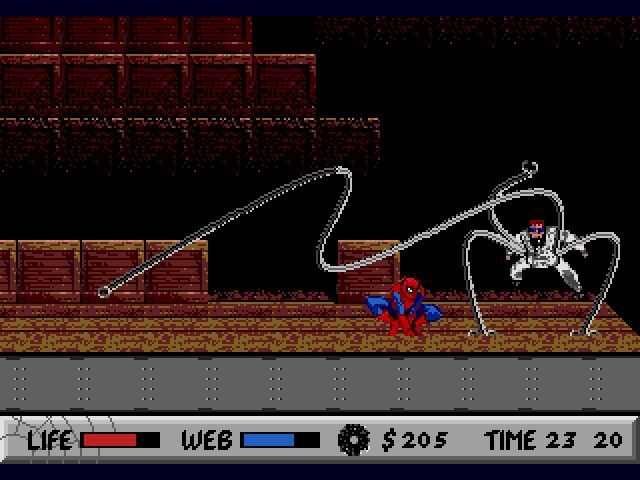 Years before Sonic the Hedgehog was a twinkle in Sega’s collective eye they had no mascot to market the Genesis with and no real notable franchises with name power like Nintendo to sell the system with.  And no, Alex Kidd does not count no matter how much you lied to yourself and believed his games were better than Super Mario Brothers.  Sega instead struck licensing deals with damn near anyone famous in pop culture.  Tommy Lasorda, Buster Douglas and Michael Jackson himself all lent their names to big Genesis titles for the time but it would be their Marvel deal that would prove the most interesting.  After his cameo appearance in Revenge of Shinobi it was only a matter of time before Spider-Man would star in his own title and it would prove to be one of the system’s brightest stars early on.

The Kingpin has planted a bomb somewhere in New York City with it set to explode in 24 hours.  In a genius move to deflect all attention away from himself he blames it on Spider-Man and the gullible citizens believe him.  To ensure Spider-Man doesn’t defuse the bomb the Kingpin has hired some of his greatest arch foes such Doctor Octopus, the Lizard, Sandman, Electro, Hobgoblin, and Venom to guard the keys needed to deactivate the bomb.

The developers have done an excellent job of incorporating all aspects of Peter Parker and Spider-Man’s character in the game to create a non-typical adventure.  You can crawl along nearly every surface in the game, from walls to the backgrounds themselves, a feature that the game leans on pretty heavily.  They’ve done a pretty good job of replicating the, uh, spidery poses and such artists like Todd McFarlane made popular in the comics although thankfully they don’t go that far.  Spider Sense is sadly under-utilized here as it will only alert you t to the presence of a boss.

Webbing is your primary means of offense and travel.  Standard web bolts will ensnare bad guys after a few hits but can also do the same for machinery.  It costs little to nothing when you spam it which is good as you’ll want to avoid melee combat as much as possible.  At the cost of a chunk of web fluid you can create a shield that will absorb a few hits although I never found it all that useful in the long run.  The web swinging is the most satisfying of any Spider-Man title from that era as they’ve nailed the physics and momentum.  Most levels feature a few wide open areas to swing in and some such as Central Park can be crossed in the span of a few seconds, web fluid permitting.

Anyone who has picked up a comic will know that web fluid is a finite resource and it’s here where you’re photography skills come into play.  You can photograph pretty much anything in the game from the regular thugs to the more esoteric enemies to which the game will assign a dollar value.  The more unique the photo (such as the bosses* hint, hint*) the more money you’ll gain which is tallied up at the end of every level and used to buy more web fluid.  If you’ve filled the bar any excess dough will carry over.

The 24 hour clock serves as the timer for the overall adventure and is always ticking down.  The game is short enough that its overly generous, with the only real drains on time coming from continuing, which costs an hour and returning to Parker’s apartment to regain health which makes the clock speed up.  There is a pretty fucked up surprise at the end of the game that will cause the clock to enter the final countdown early if you try to enter the keys in the bomb in the wrong order, causing an automatic game over.

I wouldn’t say that the game is tough overall but it does have its moments.  It’s a bit stingy with health power-ups, my guess to force you to decide if going back home is worth it.  It’s entirely possible to reach some of the later levels with little to no web fluid if you’ve been wasteful with your supplies.  If you dawdle too long in one area chances are you’ll have to face Venom along with whatever boss lies in wait.  Speaking of bosses, the boss rush at the end is brutal since you’ll be facing two at a time.  And if you survive long enough to reach the final showdown with the Kingpin I’ll just say anyone who has faced the final boss of Revenge of Shinobi will experience déjà vu.

Those are only minor quibbles in the grand scheme however.  This is a solid action title that was one of the Genesis’s earliest hits before its explosion in popularity in 199-92 and is still one of the better Spider-Man games today.