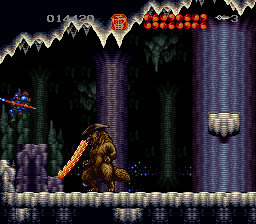 Now here’s an obscure release.  There were many heavily Japanese games that were never localized for the SNES; in most cases these games were based on a manga or anime such as Ushio to Tora or King of Demons.  Musya is steeped in Japanese folklore which sets it apart from most of its action contemporaries.  However an interesting setting does not make a good game alone and unfortunately Musya comes up short in the gameplay department.

A lone Pikeman named Imoto is the only survivor of a fierce battle.  He collapses near Tengumura Village where the villagers inform him that their shrine maiden Shizuka has been kidnapped by demons.  Without her the door to the abyss cannot be closed.  Rather than run screaming Imoto posits that this is the reason he survived and ventures into the abyss to save Shizuka.

You don’t see to many video game heroes who wield a spear so in this regard Musya is unique.  The spear has excellent range which can be enhanced further with items.  Aside from attacking head on the spear can be twirled like a fan although you’ll remain stationery during its animation unless you start moving beforehand.  Imoto has some powerful legs as he is able to super jump high enough to make Low G Man proud.  Magic comes in the form of five spells with a new one granted after each boss.  I found it pretty stupid that Seta didn’t bother to translate the names of the spells so you’ll have to memorize each icon instead; in fact there’s a lot of text that is simply sub titled or left ambiguous in the game.  Weaboos for that type of stuff are probably happier than a pig in shit hearing that.

In spite of the similarities to a certain whip wielding protagonist playing Musya is like going from Castlevania 4 back to the original.  Not so much the rigid animation but the lack of toolset.  The most glaring omission is the ability to strike enemies directly above you.  Flying enemies are a common occurrence so having to leap to confront them directly is inconvenient.  The trouble is the way the levels are designed it isn’t always optimal or possible to do so.  There are bottomless pits everywhere and jumping off screen can lead to an unfortunate demise since you can’t see the ground again until it’s too late.  It is a bit unfair to hold the game to that same standard but its faults do serve to highlight everything Konami did right with that game.

As a whole the game is unbalanced.  The spear lacks any kind of stopping power so even after an enemy has been hit they still keep moving.  Even worse many enemies will respawn immediately after death, defeating the purpose of killing them.  They’re usually placed in positions where you’ll more than likely take a hit trying to avoid them altogether.  Standard enemies go down in a few hits but boss battles tend to drag on forever.  There’s no life bar to track you progress so all you have to go on is subtle shifts in color to denote your hits having a lasting effect.  The first boss, a demonized Tanuki, is the perfect example of this.  You’re gifted with a lengthy life bar but it depletes pretty quickly with all of the cheap hits you’ll take.

The controls are a bit stiff (or that could just be the animation) with a slight delay when performing any action.  Towards the middle to the end of the game the platforming ramps up and the controls fail at giving you any sense that you are directly influencing the on screen action.  This is a pretty long game with nearly all of its eight levels broken down into three or four smaller sections.  I doubt anyone will have the patience to adapt to the game’s quirks to see it through to the end, not when you’re wrestling with the controls this badly.

The graphics won’t win any awards but the game does win points for its setting.  The many demons you’ll face as you advance deeper into the abyss draw heavily on Japanese folklore and were unique for the time.  The yokai that inhabit the game are like something out of a nightmare although those familiar with Inu Yasha will recognize some of them such as the Kappa, Tanuki (its giant balls have been removed, heh) and Daruma.  The color scheme is noticeably dark for the length of the adventure which does match the game’s tone but could have used more variety.  The soundtrack is actually pretty good and epic sounding; what isn’t good is the terribly high pitched whine Imoto makes when hit.  You’ll get tired of hearing it really quick.

The two games have nothing in common but it has to be said that Musya feels like a poor man’s Castlevania.  It isn’t completely terrible but at the same time I’d just as soon replay the original Castlevania than this; which should speak volumes as that game was broken as fuck.