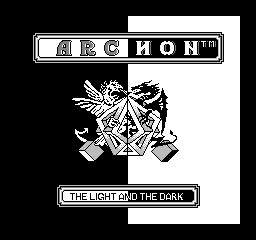 I’ll be the first to admit that I preferred Checkers to Chess in my youth.  I had little care for strategic thinking in those days and the simplicity of eating pieces one square at a time was enough to hold my attention versus learning the movement radius of each Chess piece.  Truthfully not much has changed in my middle age but in those halcyon days of yore there was one game that made the stringent idea of Chess cool, Archon.  The thought of individual pieces manually duking it was awesome and the game somewhat lived up to what I imagined.

The simplest way to sum up Archon is Battle Chess.  The Light and the Dark are locked in a battle for supremacy with this fight playing out on a 9×9 grid with three power point squares.  Each side has eighteen units apiece and the game has three conditions for victory: by having one occupy each of the five power point squares, by defeating all enemy units or by imprisoning the last remaining creature of the opposing side. Pieces are arranged in a similar fashion on the board to Chess although their movement doesn’t correspond to any given piece in that game.

What makes Archon so cool are its units.  These are simple Knights, Queens, and Bishops.  Each side is represented by numerous mythological beasts and soldiers.  The Light has knights that are the equivalent of pawns, archers, Valkyries, unicorns, a phoenix, and a Wizard that might as well be the king.  The Dark have their own evil comparable units such as goblins, trolls, basilisks, banshees, a manticore, and a Sorceress.  Every unit has a specific range that doesn’t have to abide by chess like movement patterns as well as combat capabilities.  When two units occupy the same space it becomes a battle royal to see who will win with you at the controls.

Once combat starts both pieces are whisked away to a random arena in a kill or be killed fight to the death.  Knowing your units capabilities is paramount to success as some units are faster than others and have longer life bars while some use melee attacks while others still fire projectiles at different rates of speed.  To make it fair on melee characters all ranged attacks have differing recharge times.

It stands to reason that a Golem going up against a knight will more likely win but through deft use of the random clutter you can pull an upset in the most extreme circumstances.  There are other outside factors that can contribute to your success; engaging in combat in a square of your alignment will boost your hit points and attack power but the same applies to your opponent.  The most unique units are the spellcasters in each camp who are armed with a number of spells that can be used on the board such as healing, revival, summoning an elemental or even imprisoning an opposing piece and leaving it immobile for the rest of the match.

Half the fun of the game comes in examining the powers of all your beasts and matching them up against weaker opponents.  Knights are truly useless and the very definition of fodder as their melee attacks has no range.  Golems/Djinns are pure powerhouses that can singlehandedly decimate the opposing side.  Leaving your most important figures surrounded on all sides can quickly turn the tide against you just like the magic user’s spells.

When playing against the computer every match will more than likely devolve into a free for all.  They won’t actively pursue the powerpoints but instead aggressively attack your party at all turns.  This highlights the one glaring flaw in the game in that eventually you’ll learn the AI’s predictable movements and can counteract them every time.  The AI makes some blatantly stupid decisions that you can exploit.  As a result Archon fares better as a multiplayer game, especially since there are no extra modes or options to explore.  Even a simple difficulty select would have gone a long way towards making the solo game more bearable.

If Archon had selectable difficulty levels or even variations on its main game it would have been truly awesome.  This NES version had upgraded production values over its 8-bit computer cousins but these days Archon has been remade more ways than I can count.   These enhanced remakes are probably a better value proposition, especially since they’re free.