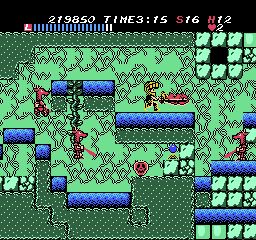 When you think of mascot games they’re usually extremely polished affairs that put their best foot forward to present their home company in a positive light.  Mario, Sonic, Crash Bandicoot, even Gex managed to star in some pretty awesome games (that’s not a slight against Gex, but honestly he was in the C-tier of mascots).   But then there were the minor leaguers who weren’t fit to carry the A-listers luggage.  Once upon a time SNK, long before fighting in the streets became popular, pushed Athena Asamiya as their corporate face.  Yes, that Athena from King of Fighters.  Nothing wrong with using a Greek goddess to show you mean business but guess what?  All of her games were terrible with the NES game classified as a hate crime against children everywhere.

Athena is the princess of the kingdom of Victory and bored.  Palace life sucks when everything is perfect and so she opens the “Door Which Shouldn’t Be Opened” and lands in a new world full of danger, Earth.  Just kidding.  Athena lands in Fantasy World and with its monsters ruled by the Emperor Dante it’s everything she could have asked for as she prepares to fight for her life.

Originally released in the arcade Athena had aspirations of being a deep platform with adventure game elements but it never came together in the end.  There was a hit gauge and strength meter that served no real purpose other than to look pretty. There were a ton of different weapons and armor to collect but in the end the game’s fatal flaw is that it completely botches the fundamentals of gameplay.  The controls and hit detection are flat out bad, leading the rest of the game to fail as a result.

I wailed on this bastard for 15 minutes once only to realize I was somehow missing his stupid hit box.

And somehow the NES version is even worse.  The hit and strength meters are gone and simplify the game in the process for the better.  At least it should.  Frankly, this version of Athena has some of the worst hit detection I’ve ever experienced in the thousands of games I’ve played.  No matter the weapon used to attack there’s never a solid sense of connection.  Most games use hit sparks, knock backs in combination with sound effects to let you know your attack was effective.  Not so here.  Something as blatant as the ball and chain will clearly pass through multiple enemies with no effect.  Even projectile weapons seem to lack punch.

Because of this it’s very easy to get killed in seconds.  Since there’s no moment of temporary invincibility enemies that touch you can drain your life bar in seconds.  There’s no visual or audio indication when it’s occurring so prepare to die with no knowledge how numerous times.  Your only choice is to move since weapons are unreliable but the jerky animation and input lag make even this simple task a chore.  There’s a sense that the game is either incomplete or poorly programmed and looking at the credits Micronics once again completely ruined an NES port of an arcade game.  Seriously these guys must have been dirt cheap to hire considering their piss poor track record.

A good portion of every level will find you smashing blocks either for items or to continue progress and the hit detection makes this more of a hassle than it should be.  Another issue I have is that not every weapon can crush blocks and the game just loves to drop these at random.  It’s actually pretty amazing how determined the game is to saddle you with a lesser weapon.  Level 3’s World of Sea is especially bad at this as new enemies spawn endlessly as you try to bust the blocks that lead to the level’s exit.  In fact I found most of the weapons and armor in the game to be superfluous.   I suppose the different armor colors represent increased defense but fuck me if they seemed to make any difference.

Graphically this is actually a pretty good port from the arcade but it falls apart in motion.  The animation appears to be missing significant frames and there’s tons of flicker and slowdown for no apparent reason.  And the game is as glitchy as one of those Tengen or Wisdom Tree unlicensed games.  Items and enemies seem to disappear at random and the bosses function as though they were programmed incorrectly.  If I could actually remember any of the music in the game I would comment but alas it was entirely forgettable.

This ranks up there as one of the worst NES games of all time.  How did we get suckered into buying it back in the day?  Well the box art looks pretty cool actually but that wasn’t anything special back then.  If you go back and look at the cover art of any Atari 2600 game you’d be led to believe your about to go on some epic adventure when in reality it was just a bunch of construction blocks.  I guess with experience we should have known better.