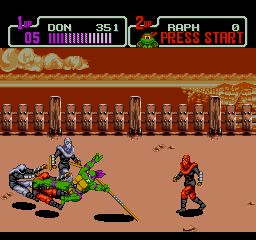 I never really thought about it but Sega owners back in the day must have been envious of Nintendo players when it came to Turtlemania.  Konami wasted no time exploiting that license in a wide range of products, exclusively for Nintendo.  This was a bitter pill to swallow, as the TMNT arcade games especially were stellar and were not ported to Sega consoles.  That drought would end in 1992.

TMNT: the Hyperstone Heist was released in the fall of 1992.  This was shortly after Turtles in Time had ended its arcade run and was ported to SNES.  April is reporting the news when suddenly everyone in attendance bears witness to the Statue of Liberty and the entire island of Manhattan disappear, the handiwork of Shredder.  Armed with the Hyperstones he challenges the Ninja Turtles to top him.

Although a somewhat original creation the gameplay is based heavily on Turtles in Time with some odd quirks.  All of the moves have been lifted wholesale with the exception of throwing enemies into the screen.  Dashing is now relegated to its own button which is a bit retarded compared to automatically sprinting after a few steps.  Body slamming enemies is noticeably more difficult to pull off, which is a bummer as the number of enemies can be a bit insane at times.  If you are at all familiar with any of the arcade games you can jump right in but it’s a shame that there were no original elements added to the game.

That last tidbit extends to the rest of the game.   There are 5 levels divided into 3 sections each which seems shorter than Turtles in Time but ends up being about the same length.   The stages are longer to make up for the reduced number.  That would be well and good if not for the fact that 50-60% of the game is recycled material from previous games.  I mean literally exact.  Every level, with the exception of Shredder’s hideout are comprised of mostly recycled stages from Turtles in Time, resulting in disjointed transitions between segments.  For instance the second level begins with a surfing segment that moves onto a ghost ship taken from Turtles in Time, then ending in the caves from the Prehistoric level from that same game minus the dinosaurs.  Even the bosses with the exception of Tatsu fight exactly the same.  If they were just going to recycle so much content why not just simply port over the games they’re ripping from?  The game would have been much better served with new content to go along with the few original levels it has.

The game tries to mimic the aesthetic of Turtles in Time and largely succeeds. The only downgrades are the special effects and the reduced color palette.  The game is noticeably darker, and I think Konami were aware of that going in as the artwork in the cutscenes has a harder edge to it.  The music, sound effects, and voices on the other hand don’t fare as well.  You’ll notice a number of instruments missing in the recycled tracks but for the most part the tunes are recognizable.  The sound effects are horrible and very tinny, lacking the clarity of the SNES game.  The voices suffer the same way speech in most Genesis games did, that is to say very raspy, sounding like it was recorded underwater.

It’s disappointing that Konami didn’t create more new content to fully flesh out the game but strange segways aside it’s still good.  If you were a fan of the Ninja Turtles (honestly who isn’t?) this will float your boat.  You could certainly do worse, such as the Genesis version of Tournament Fighters.  Yikes.