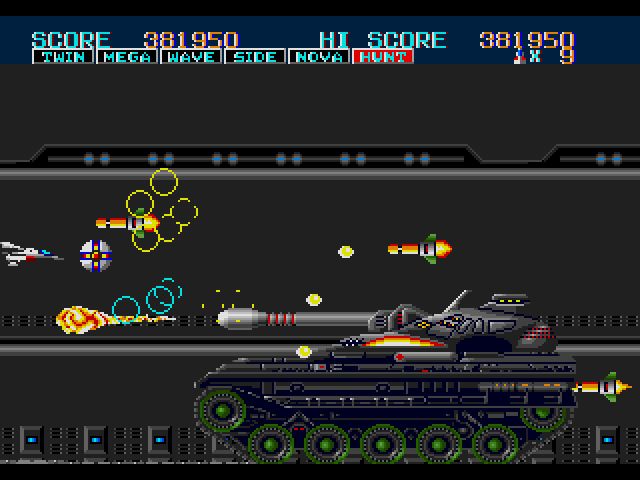 Looking back of the six or seven launch titles available for the Sega Genesis in 1989 only one or two were worth a damn.  Altered Beast was the supposed star of the lineup as the pack-in title but even I, in my 9 year old stupidity could tell it wasn’t a very good game. Last Battle was strictly average and the less said about Alex Kidd in the Enchanted Castle the better.  They sure did try to push Alex Kidd as their mascot but planet Earth had long since decided a butt crack showing plumber owned the key to their hearts.  Thunder Force II was paid little attention but in my opinion was the best reason to own a Genesis during the launch window.  Despite some rough edges it’s still a quality shooter and would lead to bigger and better things in the coming years.

The ORN Empire has returned to attack the Galaxy Federation once again.  With their new battleship Plealos they manage to cause a great amount of destruction across numerous planets within the federation.  However the federation learns of the ship’s whereabouts in between attacks and sends in the latest version of the Fire Leo to destroy it.

In the spite of the series sterling reputation among shooter fans this series had a rough start.  The original Thunder Force was not a good game and was never ported to a console, remaining a Japanese PC exclusive to this day.  Its overhead view and free roaming environment were sparsely populated and the game felt archaic even back then.  Thunder Force II occupies a middle ground between the original’s gameplay and the modern shooters of the time and while flawed is still an intense ride to this day.

The game has two distinct halves.  The overhead stages are similar to the original, giving you free reign in an extended environment as you search for the four cores that need to be destroyed in each one.  Most of these levels are gated, with some form of barricade preventing you from wandering too far in one direction.  The pace is a bit odd in these stages since you are always in motion and can’t stop.

Enemies attack constantly while you look for each core and you can build up an impressive arsenal of weapons.  By default you’re equipped with a standard shot and a twin cannon that fires behind you.  It’s a good fit since the game has a tendency to attack you from behind.  The Wide shot, Five –way shot, Crash, Hunter and Destroy can be switched between at will but are lost upon death.  The side scrolling levels add a few more to the mix such as the Wave, Nova, and Megaflash.

These top down levels suffer from the same problems as a similar game for the NES, Burai Fighter.  There’s no map to check your position; while the first two stages are fairly compact they increase in size dramatically. It’s not fun at all to wander around aimlessly looking for your objectives while staring at the same repetitive background scenery.  Meanwhile the enemies are attacking relentlessly.   If you hate these levels unfortunately they occupy half of the game including the final stage.  Its apparent Technosoft weren’t entirely happy with them since they dropped them for the remainder of the series and never looked back.

The instruction manual states there are only five levels in the game which makes sense if you count each top down and side scrolling stage as one.  Thematically it works but in terms of gameplay they’re worlds apart.  The weapons collected in both aspects of the game are independent of each other so you don’t have to worry about starting off at a disadvantage if you’ve died before recollecting them once again.

The side scrolling levels are a different beast altogether.  Similar to the majority of shooters at the time the object is to finish off the boss of that particular world.  These levels boast a level of intensity most shooters released in the same period couldn’t possibly hope to match.  There are just as many enemies as before but now you’ll have to deal with the environment as well.  The latter portions of the game almost feel like a prototype bullet hell shooter.  The action can be so chaotic in fact that it’s possible to die and respawn without realizing what the hell just happened.

What I just described is also a symptom of the unfair balance within the game.  There’s a steady difficulty curve for the most part but it’s mostly artificial.  There’s nothing fun about having your ship crushed by a wall or blockade that springs up without warning.  Or destroyed by missiles that come barreling in from off screen.  The level design does a good job of boxing you in to the point where you won’t notice a section of the wall that needs to be destroyed and Oops!  You just died.  That last side scrolling level comes across as a last ditch attempt by the designers to screw you as every cheap game design tactic devised in the 80s is thrown in there somewhere.  The type of trial and error style gameplay exhibited would fly if the game had infinite continues but you’re limited to six which will disappear quickly.

As an early Genesis title Thunder Force II is average in terms of graphics.  The overhead levels wouldn’t look out of place in a Master system title to be honest and outside of the parallax scrolling and amount of enemies the side view stages don’t fare any better.  The biggest offender however would be the sound, the sampled speech to be exact.  I suppose the terrible voice samples should have clued us in as to what to expect from the system over the years but even so it’s bad.  If you can decipher what the hell the announcer says at the beginning of the game you deserve a god damn medal.

Thunder Force II occupies a weird middle ground between the first game’s gameplay and what was expected of a modern day shooter and suffers trying to please both audiences.  With a few simple tweaks this could have been truly exceptional but is instead merely adequate.