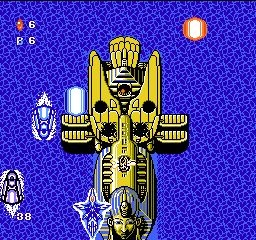 The last two years of the NES’ reign in the US saw a number of technically outstanding games that took the aging hardware places no one ever dreamed.  Games like Shatterhand, Ninja Gaiden 3, Castlevania 3 and Kirby’s Adventure made waiting for the 16-bit consoles to drop in price bearable.  But in spite of their technical prowess there were still plenty of games left in Japan that were literally jaw dropping in comparison.  Konami’s Crisis Force would be their last shooter for the NES and you could make a strong case that it is the best all-around shooter for the system.

Asuka and Maya are two teens living a dull life in Japan when their shared dream comes true.  The seven demons that sunk Atlantis and ravaged mankind have returned and plan on doing the same thing to Tokyo.  The pair takes to the sky in their Aura Wing fighters to save the world.

When most think of Konami and shooters the Gradius series will of course come to mind.  Even some of their other spinoffs use some variant of the power-up system pioneered in that series.  However Konami created more than just Gradius “knockoffs” for the arcade and home consoles such as Axelay, Xexex (oh my god so pretty!), Gyruss and Thunder Cross.  Crisis Force takes all of those years of expertise and pours it into one final graphical tour de force that also has the gameplay to back up its insane visuals.  Due to its late release and apparently lackluster sales it was passed over for a US release but can be enjoyed in spite of that as there is no text to worry about.

There’s a considerable amount of firepower at your disposal; in fact you aren’t necessarily collecting new weapons as you go along.  Instead you are powering up the ships existing cannons.  At the touch of a button your ship can assume three configurations: Front offense, which concentrates fire directly ahead of you, Side Offense, which covers your left and right flank, and Rear Offense, which is self-explanatory.  Each form has its own main cannon that evolves as you collect blue and red orbs that will power up your standard shot or give you a wave beam.  You can’t use both at once so caution is advised as you collect power-ups.  They also as well as its own bomb (which is cumbersome to use as the A button is also used to change form).

Perhaps the most important are the special orbs which will transform you into a seemingly invincible engine of destruction only limited by a timer which is constantly ticking down.  Any hits will only subtract from the timer, which can be extended by collecting further orbs.  In coop both players will control some aspect of the ship.  Considering my history with coop (I was the scrubby little brother that got everyone killed) that seems like it would be a nightmare to coordinate.

Thanks to the weapons system the Crisis Wing is a sturdy beast and rather than exploding when colliding with bullets or objects will only degrade one weapon level.  At most you’ll be able to withstand 3-4 hits before death which will come rapidly after the first since your weaponry won’t be able to keep up with the chaos surrounding you.

You’ll be leaning on that pretty heavily.  I can probably count on one hand with extra fingers the number of NES shooters that are as chaotic as Crisis Force.    The game shows little restraint as enemies come from all corners and gives you an excellent reason to try out each individual formation.  That element is the game’s greatest strength outside of its graphics; setting up numerous scenarios that make all of the Aura Wing’s forms useful.

The level design is absolutely killer as the game’s technical muscle is used for some creative gameplay settings.   The crumbling streets of Tokyo give way to gaping chasms that enemies scale in and out of to attack.  The canyon left in the wake of the earthquake is one of the most impressive effects of the 8-bit generation.  As you fly over the ocean numerous Egyptian style battleships aim to end your pursuit of their leaders as everything but the kitchen sink is thrown in your path.

As you can imagine Crisis Force is pushing the NES hard, probably too hard.  The little grey box is forced to tap out as the number of enemies per level seems to increase the deeper you progress.  Slowdown and flicker are ever present and if you’re playing coop the game will descend into a slideshow fairly often.  In single player it isn’t as bad and can be taken advantage of although you can’t trigger it on your own like in Gradius II.

If it weren’t for the 16 color limit of the NES you could easily mistake Crisis Force for an early 16-bit title. In fact it’s more visually appealing than some vertical shooters of that era (Phelios I’m looking at you).  There’s a level of detail to the backdrops that was rarely seen on the NES, a combo of great art and tech.  Everyone who has played this game will mention it but the multiple layers of parallax scrolling in the open canyon of the first level truly has to be seen to be believed.  The bosses are some of the largest on the console and are animated extremely well; none of that background tiling trickery here.  Outside of the slowdown there are no negatives in the visual package.

Crisis Force is the NES firing on all cylinders to deliver the best shooting package possible for the system.  With its phenomenal graphics and excellent gameplay you’ll be hard pressed to find anything better.  It’s truly a shame it never saw a domestic release but considering it’s a shmup that should hardly be a deterrent to fans of the genre or anyone looking to see just how hard the NES can be pushed.