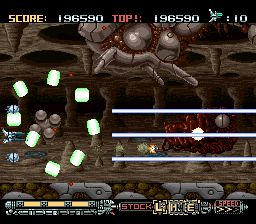 I think we have a front runner for the worst box art of all time.  Seriously what the hell were they thinking?  From a marketing stand point I can see what they were going for: most people would at least pick it up and look at it to figure out what an old dude with a banjo has to do with space ships.  But that doesn’t mean they’ll buy it.  Considering I bought the game for $15 not too long after release that should give you an idea how effective their tactic worked.  But weird box art aside is Phalanx any good?

In the year 2279 Earth begins to send out planetary expedition groups seeking new worlds to colonize.  One such world named Delia initially seems a ripe prospect but it isn’t long before a distress signal is sent warning of a hazardous leak.  A lone pilot named Wink Baulfield is sent to investigate and possibly save the planet from this mysterious threat.  Originally released for the X68000 PCs in Japan once you get past the stupid cover Phalanx is actually a pretty good shmup.  What it lacks in original features it more than makes up for in graphics and solid level design.  It skews a bit too heavily on the difficulty scale but overall it ranks pretty highly on the SNES shooter scale.

The Phalanx has a wide selection of weapons to choose from and can store three at any given time.  Most of the shooter staples are covered such as a homing shot and laser but there are a few standouts such as the ricochet and charge cannon.  All weapons can be powered up to three times but each hit makes it drop a level.  For truly desperate times you can sacrifice a weapon and make it go nova in an all-out blaze of glory.  The typical assortment of secondary weapons round out the list such as homing missiles, a rotating shield and options, you know the stuff every good shooter needs to be legitimized.

The game’s eight levels might seem familiar to longtime fans of the genre.  The initial outing in the clouds resembles Super Earth Defense Force while the level five battle ship wouldn’t look out of place in R-Type.  However despite the air of familiarity there are just as many that have original elements.  Level 2’s underwater assault features a patch of water in the middle of the screen that covers the entire length of the level.  Flying in it will reduce your movement speed and it’s necessary as there are obstructions that need to be navigated around.  The catacombs of stage 3 are rife with chunks of gravel that block your fire; a perfect opportunity to make the most of the ricochet.  The battle ship I previously mentioned is a free roaming level with the only goal being to enter its exhaust vents and destroy its cores.

Most levels have a few secret areas that basically an item extravaganza although you can still die.  The game can be stingy at times when it comes to power-ups so if you’re lucky enough to find one of these hidden zones count yourself lucky, especially if you’ve just died.

That stinginess points to the game’s only major flaw, its high difficulty.  Even on the easiest setting this is one of the hardest shooters available but not in a balanced manner.  Your shields can withstand three hits but even that doesn’t seem to be enough.  Literally every enemy explodes in a shower of bullets and it isn’t uncommon to watch the screen become blanketed by tiny red pellets.  There are a few to many instances of doors or other such obstructions that pop up and close suddenly, leaving you to take cheap hits in the process.  There’s nothing wrong with having to memorize enemy placement and such but not when the game seems determined to hit you with “gotcha” moments at every turn.  The bosses are bullet sponges and if you happen to die its fruitless to bother trying to get by with just the standard pea shooter.

Phalanx was an exceptionally beautiful game back then and remains so today.  Most levels feature anywhere between 3-7 layers of parallax scrolling backgrounds and the effect is exquisite to watch in motion.  The opening sortie in the clouds gives way to a bustling cityscape below at night time.  Every level is unique and even the standard space levels offer some element that lets it stand out amongst the hordes of shooters released in that era.  There’s very little slowdown if any but there is some flicker during the most heated moments.  The soundtrack is melodic and inspiring, a stark contrast to the brutal difficulty that lies behind the pretty graphics.

Phalanx is a highly challenging yet entertaining shoot em up released during the height of the genre’s popularity in the US.  It’s a shame that the game’s choice of cover art has overshadowed the product itself however those that can look past it will be rewarded with a solid action title.   The Gameboy Advance port tweaked the difficulty and is more forgiving plus has an auto save feature so if the SNES version proves too much to handle you can always go that route.