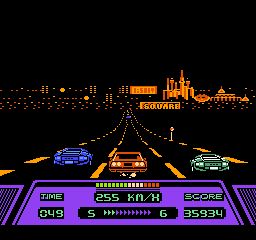 Christmas 1987 stands out for a number of reasons for me personally because I distinctly remember receiving numerous games as presents that year.  Kid Niki and Rad Racer were the two lucky recipients in my household that fateful day and while Kid Niki was decent for its time this is what kept us occupied all day long.  Racing games along with first person shooters and platformers have benefitted the most from technology but even in spite of the march of progress Rad Racer still has a level of intensity unmatched by many of its peers.

Rad Racer holds the distinction as one of the first true racing games for the NES.  I suppose Slalom could be viewed as part of the genre but the less said about that game the better.  1987 was the year many developers began to attempt more ambitious adventures such as Castlevania, Metroid, Zelda and the Goonies II so it only seems fitting that the racing genre would see a little bit of love.  And from an unlikely source to boot!  In Japan Final Fantasy was still months away and Square were still experimenting with different genres but unlike those other failures (3d World Runner, King’s Knight) Rad Racer is class all the way.

There is no overarching story about some uncouth youth wanting to be the best driver in the world, just a car and the objective of reaching the goal before time runs out.  In practice its similar to Sega’s Outrun; although there are other cars on the track you aren’t fighting for position but rather to hit each checkpoint with as much extra time possible.  The race against the clock proves to be more intense than many racing games that litter the track with over 30 AI opponents to compete against.

The choice of a Ferrari or F1 racing machine is purely cosmetic no matter what anyone will try to prove.  They both have the same maximum speed limit of 255 mph and offer unlimited turbo.  The sparse UI  offers just enough information without being distracting; speed, time, and how much longer to the finish line.  You only get one look at the actual map of each course once before the race begins (and now that I think about it I probably should have made a hand drawn map for future reference)

In many ways Rad Racer is the game that taught me about how to manage speed and breaking.  The sensation of speed is very tangible, probably more so than any other racing game for the NES.  Once you’ve reached max speed it’s almost scary just how fast everything whips by.  Obviously you can’t take corners effectively at that level and the familiar strategy of tapping the accelerator doesn’t work here.  If you’re going too fast you’ll start to drift off track rapidly or will get thrown into the trackside scenery.  Knowing how and when to break becomes the most important skill in the game since you can’t afford to lose precious seconds getting back up to speed.

This is hilariously over the top but chances are if you’re seeing this you’ve lost.

A large part of the game’s intensity aside from the speed comes from its tight checkpoints.  The first few courses are a bit lenient in terms of giving you extra time in case you screw up.  By the time you reach Athens you literally can’t afford to make any mistakes.  At that point a collision with a drone car that would normally cause a slight bump or throw you to the side will cause your car to flip over and while I freely admit that it’s awesome to see the train wreck in action it’s literally game over when it happens.  I can vividly remember the tears flowing as my brother lost by seconds on the final track with the goal flags in plain view.  You ever see a grown man cry?  I have, and Rad Racer was the cause, it’s that soul crushing.

Presentation wise the game was decent for its time but does come across a bit Spartan now.  Years before I would ever learn what Athens or the Grand Canyon were Rad Racer painted my perception of these real life locations with its distant backgrounds.  There’s very little trackside detail other than the rocks and signs that will potentially end your racing career.  The true visual highpoint is the night time tracks like San Francisco and Los Angeles.  The city lights against the neon track highlights are truly awe inspiring for an NES game.  The game also has a 3d mode and came with the cheesy red/blue glasses that were popular in the 80s.  Honestly it was a novelty then and is awfully headache inducing now.  The music selection is limited to only three tracks but they’re all memorable; Nobuo Uematsu kicks ass whether it’s an RPG or not.  The only frustrating aspect is that you change the songs by pressing down, which tends to happen during the best parts!

I’m glad Rad Racer has stood the test of time and is a perfectly worthwhile way to kill an hour or two (or three) for those who love classic gaming.  Most 2d racing games used a variety of tricks to accurately portray the sport; Rad Racer does so by sheer grit and is a better game for it.