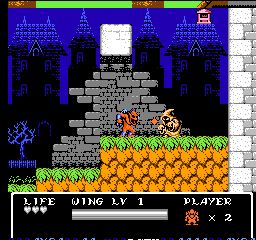 Despite his status as one of the most frustrating enemies to deal with in videogame history alongside Castlevania’s Medusa heads Firebrand/Red Arremer has been fortunate to star in 3 outstanding games.  The Gargoyle’s quest series has spanned 3 consoles, the original Gameboy outing, the final SNES installment and this lesser known NES entry.  1992 can be considered the last truly great year for NES software but sadly most of it went unnoticed as the 16-bit war heated up.  Gargoyle’s Quest 2 is an excellent action adventure reminiscent of Metroid and one of the best NES games of all time.

Firebrand is a young demon training to become a warrior.  A mysterious Black Light begins to engulf not just his home town of Etruria but the rest of the Demon World as well on the eve of his trial.  As the lone warrior remaining Firebrand is tasked with unraveling the mysteries of the Black Light as it spreads across the demon realm.

Gargoyle’s Quest 2 maintains the structure of the original Gameboy game while trimming the excess fat from the game.  Exploring the demon world is done via an overhead view while any caves, dungeons, and other such action areas switch to the traditional side view.  Although it has all of the trappings of an RPG most of those elements are fluff.  The vials you collect are only used to purchase extra lives (called maelstrom in game).  Firebrand’s stats like Wing strength, leaping ability, and maximum health as well as his “armor” and wing all increase at set points in the game, not through combat.  Speaking of combat, the annoying random encounters of the world map are gone although there are still demons available to initiate brief encounters for extra vials.

While the world map mostly serves as the connective tissue between areas there are loose vials to find as well as optional encounters.  This is a pretty sizable world with many locations to explore and demons to converse with.  While not entirely linear you’re always aware of where you need to go next and generally can’t progress until that objective is completed.  The game effectively gates new areas by requiring certain abilities but it never feels stifling.  There are points towards the end where you’ll have the option of completing certain dungeons in the order of your choosing so that helps as well.  Removing random battles and increasing Firebrand’s walking speed go a long way toward keeping the game moving at a brisk pace.

Once you’ve entered one of the game’s many action stages you’ll become familiar with Firebrand’s abilities (or lack thereof in the early going).  Since he’s only just become a warrior Firebrand is pretty limited at first, only able to fly short distances, leap a few inches off the ground, and fire a lone fireball at a time.  With each boss or item collected the list of magic grows, although it’s virtually the same as the first game with the exception of the magic tornado, which functions as a platform and weapon at the same time.  As your flying and leaping powers increase previously inaccessible areas become available.  This is a lengthy game by NES standards and will take a few hours to complete so thankfully there are passwords to save progress.

The level design has seen a noticeable improvement over the Gameboy game.  By virtue of the fact that you can see a wider area due to the increased resolution you’ll no longer have to make blind leaps of faith.  Enemy placement can still be suspect at times but it never devolves to the level of Castlevania or Ninja Gaiden.  The Gargoyle’s Quest has always relied on the exploiting the fact that Firebrand can’t fly permanently and the excellent level design takes full advantage of that.  In many ways this is a precursor to Mega Man X with its heavy focus on vertical platforming and making use of both protagonists’ ability to cling to walls.  The game has an even difficulty curve until close to the end of the game.  Once you’ve acquired Firebrand’s full suite of abilities there is a noticeable spike as the level design becomes more adventurous.  Areas like the House of Mirrors and Breager’s castle are the stuff that NES diehards were brought up on and can be frustratingly hard but overcome with a bit of persistence.

Aside from the increased viewing distance Gargoyle’s Quest 2 replaces the simple boss battles of the first game with true tests of skill.  You could totally cheese your way through the first game by standing still and mashing the attack button but here you’ll have to learn patterns and avoid the suicidal demons you’ll face.  Bosses such as Doppelganger and the Sand Frog will aggressively follow you around, making the turtle tactic useless.  The boss battles are oddly paced in that you’ll face some of the harder bosses earlier in the game while later demons are simple.

This series has always excelled technically, even on the Gameboy, so it’s no surprise that it is one of the standout titles for the NES.  The game has a sinister tone to its art direction and the gothic architecture along with the subdued color palette are a perfect match.  The demon design is second to none, with Capcom’s artists going to town on the sprites.  Gargoyle’s Quest 2 matches up favorably against other late generation efforts such as Kick Master and Bucky O’Hare and goes to show just how much Capcom had mastered the hardware.

Another overlooked masterpiece for the NES.  It really is criminal the sheer volume of releases during 1992 that very few picked up.  Considering that year saw the release of A Link to the Past, Street Fighter 2, Super Mario Kart, Sonic 2, etc. it’s understandable but now is the time to go back and rediscover a lost classic.