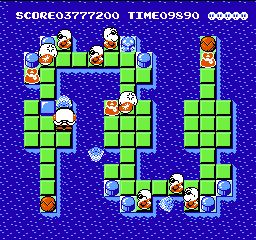 Growing up I had a middling appreciation for puzzle games.  There were few released for the NES and outside of Tetris I barely gave them a second glance.  But it was games like Adventures of Lolo that showed me the light (so to speak) and gave me a newfound admiration for a genre that is all about its gameplay.  Kickle Cubicle was a game I read about in Nintendo Power but could never find in stores.  It would be years before I’d finally track it down and thankfully time did little to diminish its brilliant gameplay.

Originally released in arcades by Irem it was nice to see them take a break from the serious shooting action of R-Type.  The evil Wizard King has taken over the Fantasy Kingdom, enslaving its people and stuffing them into dream bags.  Kickle is the sole denizen of Fantasy Kingdom unaffected and sets out to save the world with his freezing breath.

Kickle Cubicle is most often compared to Adventures of Lolo and the comparison is valid.  Both games are single screen puzzlers although KC is a bit different.  Kickle is armed with two abilities, his freezing breath which will turn enemies into blocks or stop them in their tracks briefly and the power to create ice blocks.  The majority of the time you’ll be freezing the blue Noggles and using them as an all-purpose tool to solve each level’s particular conundrum, whether it’s creating make shift bridges over water or filling in gaps between islands.  It’s a simple set of mechanics that is greatly expanded on through the game’s clever level design.

The main objective of each level is to collect the three dream bags placed somewhere on the map; doing so will end the level and warp you to the next.  At 4 lands (Garden, Fruit, Cake and Toy) comprised of 17-20 levels the game ran the risk of becoming repetitive in short order but introduces new play mechanics at a steady clip.  The number of enemies has been reduced over the Japanese version, keeping the focus squarely set on figuring out just how you’ll manage to reach that one out of place bag before time runs out.  Having said that repetition does set in after extended play sessions which is an unavoidable fact.  If they would have added 2 or 3 more lands kept each at an even 10 levels it would have done wonders in terms of variety.  By the time you reach the end of a given world you’ll have tired of its theme and set pieces.

The puzzles seem to alternate between the simple and complex every few stages but as a whole I wouldn’t say it’s too challenging.  The first world keeps it simple with the only new element added being the water holes that can’t be filled or stepped over.  You can however kick blocks through them to create alternate pathways.  It’s at Fruit Land that it truly ramps up with springs, breakers, hammers and power rocks all requiring some form of manipulation to complete a given scene.  While I mentioned the game alternating from the easy to hard in truth there are few puzzles that will really have you scratching your head until the last 10 or so levels.  They usually require just enough critical thinking that when you do eventually stumble across a solution (and in most cases there’s more than one) you’ll wonder why It took so long.  For those truly looking for a challenge Special Land becomes available after completing the game, offering 30 more brain teasers for those that crave more.

Gameplay wise Kickle Cubicle is solid but in terms of presentation it is lacking.  I realize that isn’t the game’s focus but at the very least if you’re going to call it toy or cake land shouldn’t there be some visual representation of that?  Instead every level is basically the same iced over landscape.  Only the bosses offer some form of visual variety.  The game doesn’t fare any better on the music front with the same track repeated for the length of the entire adventure.  God even Tetris managed three.

Kickle Cubicle is an underrated puzzle/adventure game on a console that that managed to cover all the bases.  It doesn’t reach the heights of the Lolo series but is unique enough to serve as a viable alternative for anyone who loves that style of gameplay.