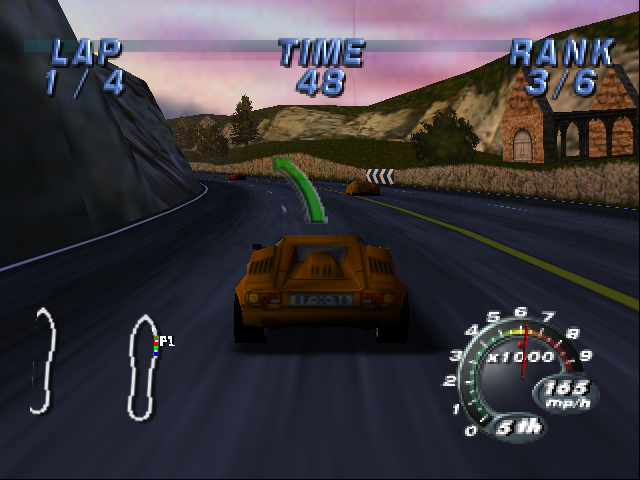 I suppose everyone had to find their niche somehow.  By the end of the N64’s first year on the market there were entirely too many racing games in my opinion.  Any developer trying to make a splash in that crowded space would have to do something different; the standard Ridge Racer style power slide extravaganza had long since been covered.  Developer Titus took a slightly different tact with Automobilli Lamborghini, choosing to focus on one style of car.  Sega would later do the same with Ferrari F355 but would have much better results than this slightly bland effort.

The initial selection of cars is limited to different colored Lamborghinis in the beginning, meaning you’ll have to earn the right to hop in a new beast first.  Eventually the garage opens up to include to Ferraris, Porsches, and other Lamborghinis.  The handling of each vehicle is pretty straightforward with little variation between each beyond maximum speed and acceleration.  Overall the controls are extremely touchy; there’s a heavy amount of over steer you’ll have to adjust to, something that should have been fixed but wasn’t.  It’s a little disappointing at first but you’ll become accustomed to it soon enough.

Unlike most racing games of the time Automobilli Lamborghini is as straight laced as it gets.  Don’t expect any radical hills or peaks, jumps, or wild forks in the road here.   The lack of anything interesting in terms of track design really does kill some of the excitement of a race, further ruined by the game’s lacking sense of speed.   At its fastest the game does a semi decent job of making you feel as though you’re whipping through the tracks at a decent clip but it takes a while to get to that point.

The 6 courses are a bit deceptive in number.  While the layout is different the last 3 tracks share the same “theme” as the initial batch, with the same trackside elements and all.  While you’ll get a slight sense of déjà vu it’ll quickly evaporate as each race presses on.  There are a decent selection of modes available, from arcade, time trial, and single race to better acclimate to the controls and a decent amount of unlockable content.  You’ll definitely have to work for it though as the AI puts up a fight.

The computer AI does make up for that though.  The AI racers do a well enough job of fighting you for position and aren’t afraid to push you off the road or even crash into you to prevent you from passing.  The rubber band AI that plagued so many racing games of that era is an option in this game thankfully, although I think you have a hole in your head if you turn it on.  With only 5 other drone cars to compete with it does get boring once you’ve managed to pull ahead; this is one instance where rubber banding might preserve the intensity of a well fought race but I look at it as this; if you’ve managed to get in first place it’s due to skill, not the game handicapping itself to help you out.

In many ways the design decisions were probably made to keep the frame rate high.  Automobilli Lamborghini was an extremely pretty game in 1997, one of the best looking racing games on the market.  The tracks were kept simple to afford a higher level of detail that is apparent from the get go.  There’s very little fog since it isn’t necessary as the game has a long draw distance.  The repetition of track side detail is a sign of cartridge limitations but doesn’t harm the overall visual package.  The soundtrack is merely serviceable in comparison, a fact that we were becoming familiar with in N64 games.

All in all, solid but not spectacular.  With as many racing games crowding the N64 library that simply isn’t enough unfortunately.  There were many amazing racing games vying for attention on the system and a bland game simply deosn’t stand out.