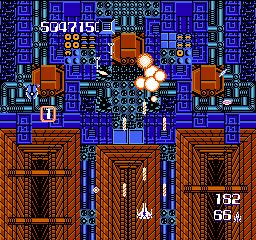 I really do miss Compile.  I freely admit that shooters aren’t necessarily my favorite genre and that I tapped out somewhere around the PlayStation generation.  But that doesn’t mean I can’t enjoy a good old fashioned romp as a lone fighter against an alien armada.  Much like Konami and their various Gradius spinoffs Compile’s shooters all had a distinguishable flair to them that was instantly recognizable; if you’ve played Guardian Legend (and you should) or Gun Nac you know what I’m talking about.  Zanac, one of their earliest efforts for the NES, still holds up today despite a few of its features being a bit wonky.

Zanac actually has a story that contextualizes many of the enemies you face in the game although the instruction manual does its Sunday best to mangle it.  Long ago an alien race created an object known as the system that functioned like Pandora’s Box.   If properly accessed it would grant boundless wisdom, if improperly opened it would unleash havoc.  Since a game about world peace would be boring mankind chooses option number 2 and threatens the entire galaxy in the process.  Humanity manages to gain the System’s wisdom but can’t shut it off.  Due to its ability to adapt to high priority threats a lone star ship is sent to infiltrate and destroy it from within due to the System’s inability to prioritize an immediate threat.

As a vertically scrolling shooter Zanac features a pretty extensive arsenal of weapons to choose from, more than most other shmups combined and you’ll undoubtedly find a favorite.  The standard cannon can be upgraded slightly to a wide triple shot fairly easily by collecting power chips cased in blue boxes.  While it isn’t the greatest until the final power level it’s at least serviceable if you die.  The special weapon button by default fires a multi-directional blast that is slower but more powerful if you don’t have a weapon.  Since you respawn immediately after death you aren’t penalized too heavily unlike other shooters.

The special weapons however are the true heart of the game.  Numbered from 0-7 each is unique and serves a different function, be it offensive or defensive.   Tile 1, the straight crusher, is a single (or double) ball of energy that will destroy all in its path but there can only be one on screen.  Tile 3 is a circular shield that rotates around you for a set time limit.  Tile 5 is deceptive; it’s similar to the straight crusher but comes back to you, hence the name Rewind.  As frustrating as it is to wield if you stick with it it can be upgraded to an all-powerful triple laser.  Tile 6 is so worthless it’s not talking about.  My personal favorite is number 7, high speed.  Not only can it be directed to cover the majority of the screen it fires faster than every other weapon and can destroy enemy bullets.

You’ll notice I left out number 2 and that’s for a reason.  As a meager shield that needs to be upgraded almost fully to be of any use it pales in comparison to the other weapons.  But that’s not it.  I don’t know whether it’s a bug or if it’s intentional but the game really seems to hate it; the minute you pick up number 2 the game will send a never ending stream of enemies at you until you die or get rid of it.  Considering how weak it is chances are the former will happen first.

By collecting more of the same weapon they can be upgraded up to 3 or 5 levels and the changes in certain weapons can be devastating.  I’ve already gone over tile 5 but some like Tile 4 can decimate the bosses in seconds.  The game will routinely throw weapon power-ups in plentiful supply; some are in boxes on the ground and particular ships will fly in routinely and cycle through the numbers in sequence, even during boss fights.  It goes without saying that your choice of weapon will greatly impact the game experience but I mean that literally and figuratively.

The story behind the System’s artificial intelligence also ties into the game.  Zanac feature a “system” called The Artificial Level of Difficulty Control, or ALC.   As you play the game it assesses your performance and will adjust accordingly.  Depending on the special weapon equipped certain enemies will appear more frequently.  If you spend long periods of time without dieing and collect power-ups regularly the game will throw more at you; if you’re a shmup ace the game can quickly become extremely hectic.  If you die frequently, miss power-ups or can’t defeat the bosses within the time limit the game will have pity on your sad gaming skills.

It doesn’t sound any more advanced than what most games do now but Zanac was released in 1986 and was groundbreaking for the time.  For the most part most gamers will at least be able to make it to the second half of the game’s 12 long levels but if you’ve made it that far the game knows you have some level of skill and will go into overdrive.  Technically you can “game” the system by intentionally trashing your performance but you’d need a large stack of extra lives to manage that.  This is one of the longer shooters out there and even I took many years of trying on and off to beat the game.

Considering it was released early in the NES’ life it’s amazing that Zanac is still one of the better shooters released domestically.  It isn’t much to look at graphically but it has the game play to keep you coming back for more to make up for it.