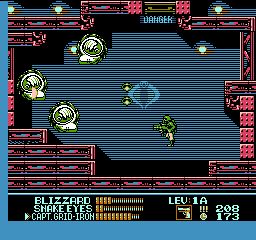 For some strange reason I avoided the G.I. Joe NES game back in the day.  There might be a few reasons why of course; licensed videogames were hit and miss in that period, hell they still are even now.   While Capcom and Konami were virtually the gold standard in terms of treating a license with respect Acclaim and LJN stunk up store shelves with crap like X-Men and Back to the Future.  I don’t think I could bear to see one of my favorite childhood properties sullied in the video game space.   You have to understand, I still retain vivid memories of running home after school to catch, Transformers, G.I. Joe, and Duck Tales (ah that golden era!).  But I needn’t have worried; Taxan published a number of classic gems and did the license proud.

There isn’t much of a plot to be honest.  Cobra is up to no good so General Hawk assembles a team of Joes to disable six of their bases around the world before the final assault on Cobra Commander.  That’s enough of an excuse to bring together some of the fan favorites from the cartoon and toy line don’t you think?  While G.I. Joe makes no bones about being a big dumb action game it makes clever use of its premise to vary the gameplay, helping it to rise above most of the standard action games of the time.

The first thing we have to be clear about, everyone has a favorite Joe.   With such a diverse set of “characters” there’s one for every kid or adult to identify with.  It would have been impossible to satisfy every gamer by including the entire roster of the franchise but within the confines of the game’s story they’ve made some good choices.  Duke, Rock & Roll, Blizzard, Snake Eyes, and …….Captain Grid Iron answer the call of duty.  You know what?  Who the fuck is Captain Grid Iron?  He’s a dude in a football helmet for Christ sake.  Granted, guys like Refrigerator Perry and Sgt. Slaughter were part of the team as well but we all know it was a cross marketing thing.

I digress.  Each character is graded in terms of stamina, jumping power, punch, and weapons.   Naturally this means that they all specialize in a particular area with some side benefits as well.  Captain Grid Iron is physically the strongest but sucks with weapons, which manifests as a short burst.  Rock & Roll has the best weapons but in all other categories is terrible.  Blizzard…frankly sucks.  While Snake Eyes might be the fan favorite he isn’t the ultimate character you would expect in this game.  He jumps higher, can attack fastest, and also uses no ammo (he throws fireballs) but is pretty weak overall.  When all else fails you can fall back on Duke, who is overpowered.  If you don’t bring Duke to every mission you have a hole in your head.

These distinctions are necessary as each of the game’s six levels is led by one team member who is supposedly suited to that environment.  You can pick two support members that you can switch between at any time, so if push comes to shove and you don’t like a team member (Blizzard) the game doesn’t force them on you.  Another added bonus is that they have separate life bars, a design decision you’ll have to take advantage of to survive.

Each mission is broken into 3 parts; the initial infiltration of each base, setting up the bombs, and the escape which ends in a boss fight.  There are a number of enemy vehicles that can be commandeered for added firepower and are ripped straight out of the toy line.  While fighting your way into each base is typical platform fare, the second act of each level takes on a Metroid tone as you are placed on a large map with free reign to explore.  The targets where the bombs need to be placed are conveniently marked (how thoughtful of you Cobra!) and are a race against time since you’ll need to get all of them and find the exit.  The boss fights feature some of the more popular villains from the show, such as Metal Head and Destro.

What makes G.I. Joe such an enjoyable game is the designer’s clear understanding of the property.  It would have been easy for the developers to go nuts and try to cram in as much as they could from the toy line and cartoons as possible but instead they used restraint, only borrowing when needed.  While most expected a straight run and gun action game like Contra the fact that the game is a blend of styles works to its advantage.  The maps are huge in scale, with enough rewards for those who like to discover secrets.  Despite the same mission structure throughout the entire experience it never feels repetitive.

And the game as a whole is pretty balanced.   While it’s possible to select a bad combination of partners for a given mission having the option to change at any time means you have room to make mistakes.  The boss battles are intense enough that you’ll probably die a few times but at the very least the passwords and continues make it a worthwhile endeavor.

G.I. Joe is one of the better action games on the NES and has enough unique features to make it a good time waster on a boring afternoon.  I don’t remember much press for the game back in the day which is surprising considering how pervasive the franchise was at the time.  In spite of that it remains a top pick in the system’s library, one that I give my full recommendation.