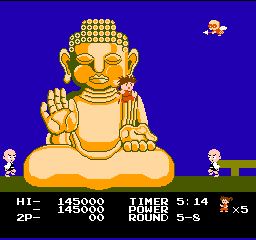 I remember Christmas of 1990.  Opening the gifts and seeing two NES carts: Rad Racer and Kid Niki.  Rad Racer was awesome for what it is but it was that pink box with the bad ass ninja in a yellow gi (I know, an oxymoron) that intrigued me.  Misleading box arts had been taken to an art form as far back as the Atari 2600 era (remember those hand painted covers and the giant gulf between the actual game and your imagination?  Yeah.) but at least in this case the game itself was actually decent.

Originally released in the arcade by Irem Data East had the honor of bringing it to the NES.  Kid Niki is the most radical ninja in his school, much like Naruto.   One day a passing bird is shot by an arrow with a message tied to his leg informing him that his girlfriend Princess Margo has been kidnapped.  Declaring that “Will save you” Kid Niki sets off.

I did not make any of that up.  Certain liberties were taken in the localization, injecting a bunch of lame surfer speak into the game and also changed some of the sprites to make them less Japanese.  A pointless gesture in my opinion as the rest of the game’s Japanese influence is evident.  Regardless of the shenanigans of various US offices back in the 80s Kid Niki is a decent platformer with plenty of tricky challenges for fans of the genre and a decent conversion of the arcade game.

Kid Niki is armed with the spinning sword, a very useful weapon that pretty much covers your offense.  Because it spins an inch or so in front of you it can take out enemies before they reach you and also has a good spread.  Enemies that are a bit above or below will also be hit by its attack, negating the need for complex positioning.  Because the spinning sword is so useful there is only one other weapon, a silver bell that grants a temporary shield that rotates around you.  That’s makes little difference as the game is mostly focused on tricky platforming.

The level design is full of all the little tricks that designers used to trip up gamers.  Enemy placement is pretty devious, designed to punish gamers who try to rush through each level.  Although the game is timed you shouldn’t feel the need to rush although the game is very fast paced.  For those that are adventurous there are bonus stages hidden in every level that will potentially net extra lives which you’ll need to deal with the bosses.

The bosses are a dastardly bunch that range from the serious to the wacky.  Don’t let their strange attacks fool you however, as they are tough.  Each boss has a very specific weak point; if you miss your sword is flung across the screen and needs to be retrieved.  The angry monk who shouts Fool might seem a bit silly but the raining letters are not.  Death Breath reminds me of the monk in Big Trouble in little China who loses his shit and inflates and explodes for no reason (I probably lost a bunch of you with that reference).  The final boss, the Stone Wizard, is actually a throwback to Kabuki actors of old, which is odd but terrifying at the same time.

The wonky hit detection is the main culprit when fighting the bosses as its never really clear exactly where they need to be hit; more than likely you’ll do it by accident.  The one hit deaths really start to add up when you’re not even sure you’re doing it right.  Some like the Samurai Guard are extremely hard to hit and while you want to wait for an opportunity to attack the time is always ticking.

I was prepared for Kid Niki to be a run of the mill platformer like other drek like Kid Kool but in the end it surprised me.  It isn’t a long forgotten classic of the era but it is surprisingly decent for what it is.