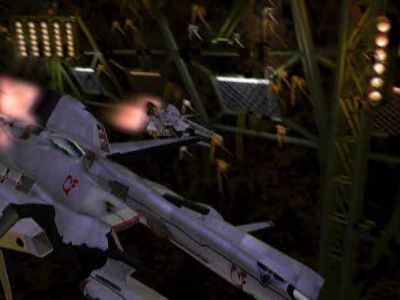 It never fails.  At every system launch there’s always that one game.  You know the one.  The game that attempts to use every hardware feature of a console in a vain effort to shock and surprise you with sights you’ve never seen before.  In truth behind the shiny veneer is a shitty game with good graphics.  If we’re lucky there’s at least one game at a new system launch that is a legitimately good game not possible on prior hardware.  The NES had Super Mario Brothers, the SNES had F-Zero and Pilotwings, the Wii had Wii Sports.  Then there’s the trash like Philosoma.

In the distant future Earth has colonized many planets throughout the solar system.  One such colony, Planet 220, has come under attack from an unknown alien force and requests aid.  Alpha and Bravo teams are sent in but contact is quickly lost.  All hope falls on the shoulders of rookie pilot D3 and his companions from Charlie squadron.

The ship is equipped with 4 weapons that can be upgraded 3 times each for devastating results.  The Vulcan is your standard rapid fire cannon, the Piercing Laser (oh so pretty!), the A-Break , which needs to be charged before each shot, and the Ray-B, which only fires behind you.  Supplementing these are bombs, homing missiles, and grenades.  Unlike most shooters you have a lengthy life bar which is necessary as enemy fire comes in massive spurts and because of the ever changing camera angles sometimes impossible to dodge.

Most shooters fall under horizontal or vertical viewpoints for gameplay purposes however Philosoma makes a valiant attempt at being all things to everyone.  In addition to the prior two there are also rail shooter segments, isometric segments, behind the ship, under the ship and even in front of the ship.  The camera will change multiple times per level for no apparent reason; well there are usually story based reasons but its paper thin.  All this technical trickery is impressive at first but it ultimately can’t hide a boring shooter at heart.

There are 4 phases broken down into as many as 5 sub-stages as you descend deeper into the planet.  While the ongoing struggle of the team will dictate the varying viewpoints as you progress it can’t help but feel lifeless and a poor excuse to imitate the more popular shooters of the day, only not half as well.  The rail shooter portions of the game feel like a cheaper version of Star Fox but lacking a fraction of that game’s intensity.  The side scrolling portions are the most accomplished but come across as a poor man’s Thunderforce.

Even worse several of the camera angles make no sense and are badly designed.   For some inexplicable reason the camera will zoom in really close during the side scrolling stages, with your ship occupying a good 40% of the screen.  Did they honestly think it looked good?  Not only is it heavily pixelated but trying to dodge enemies let alone bullets is a nightmare.  The in the camera viewpoint might look cool but is useless since you only have one effective weapon to use here and getting smacked repeatedly due to bad depth perception is never good.  If they would have focused on one or two angles and polished the hell out of them Philosoma would have been a better game for it.

Philosoma is a very story heavy game for a shooter, with constant radio chatter from your squad members much like Star Fox.   Unlike Star Fox you’ll only see your wing mates during the cut scenes.  The plot is a little interesting for what it is but ultimately not strong enough to carry the game despite the obvious heavy attention given to it.  The lame voice acting certainly doesn’t help matters either.

Outside of the voice acting Philosoma isn’t a very attractive game.  In spite of the varying camera angles the game is very 16-bit in appearance with only brief flashes of brilliance.  The heavy use of FMV cut scenes might have been impressive in 1995 but now are simply annoying and not as impressive as they once were but truthfully most CG from that era looks bad now.

Take away the camera trickery and FMV that the PlayStation allowed and you’re left with a game that would still only be above average on the SNES or Genesis.  The pickings were slim early on for the PlayStation but not so slim that I dared more than a rental with Philosoma and even then I regretted it.