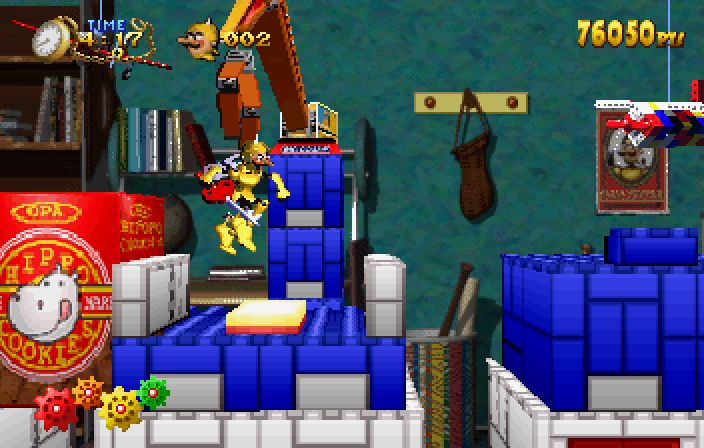 For all of Sega’s misfortune in the gaming you have to give credit where it’s due, they were always thinking ahead of the curve.  The Sega Channel can be seen as an early form of the digital distribution system we enjoy today.  They were one of the first to embrace CD technology in video games along with NEC.  Sega were one of the pioneers of 3d gaming with their Model 1 and 2 arcade games.  A year before Toy Story would shock the world Sega released Clockwork Knight, a platformer that loosely shared the same ideas.

Every night Chelsea the Clockwork Fairy Princess awakens the toys of the house with her voice at midnight.  Sir Pepperouchau III is in love with her along with his rival Ginger.  When a mysterious force spirits Chelsea away Pepper springs into action to save her.

In 1994/95 Clockwork Knight was something of a showcase for the 32-bit Saturn. Its mix of rendered graphics with polygonal elements was unheard of at the time and visually shocking.  Granted Donkey Kong Country managed to squeeze rendered graphics into an SNES cartridge but not to this level. But for Clockwork Knight’s entire technical prowess it is ultimately an above average platformer that is more content to play by the numbers than really use its premise for exciting gameplay.

As Pepperouchau you are toy soldier armed with a keyblade (suck it Kingdom Hearts fans Nomura didn’t invent that shit!) for offense.  The keyblade can be used to directly attack enemies or twist it for extra damage.  The standard jab is weak but will daze enemies, allowing you to pick them up and toss them.  Twisting the keyblade can also be used to open boxes or passages by inserting it and winding it like a gear.  There are a few items to collect, such as clocks for extra time (not that it’s ever necessary), gears for health, and invincibility but for the most part you won’t be needing them.

The entire game takes place inside the house of Pepperouchau’s owner with each set of levels taking place in a different room of the house.  The first thing you’ll need to come to grips with is that Clockwork Knight is not a Mario or Sonic game; the platforming is slow and deliberate.  Pepper is not the most agile protagonist as evidenced by his slow sprint and flailing jumps.  Although the levels are timed there is more than enough time to explore each level for extra lives and health.

As you move through the house the varying toy themed hazards change as you progress.  Clockwork Knight does take advantage of the fact that all of the enemies and hazards are composed of simple items, much like Monster in my Pocket.  Pencils serve as spiked pits, stove tops are furnaces, and books serve as blockades that need to be pushed out of the way.  The level design can be clever at times, such as navigating the train tracks of stage 5 or exploring a castle made of Lego bricks. Had Sega not been so conservative in terms of the game’s design this could have been a blockbuster.

Despite its premise Clockwork Knight is ultimately boring.  As hard as it is to believe the fact that it comfortably sits in the sweet spot of not too hard but not too easy is a detriment.  Most enemies don’t seem the slightest bit interested in attacking you and are easily dispatched.  Most levels can be completed by making a bee line to the exit with little opposition, ignoring the myriad floating platforms if you like.  Extra lives are frequent, and with a little luck can be amassed quickly in the bonus stages after every boss.  What little challenge there is available comes in the boss battles.  While their patterns are easy to recognize the bosses such as the toy Transformer move faster than you.

The argument of hand drawn art versus rendered graphics raged for many years and while certain games made a case in favor of the rendered plastic ultimately hand drawn art proved timeless.  Clockwork Knight is ultimately a victim of this war, with its low resolution rendered backgrounds looking dated today.  The color palette is extremely drab and off putting as well.  The polygonal background objects stick out like a sore thumb with little attention given to make them look as though they belong.  The full motion video cut scenes suffer from the terrible video compression used in the Saturn’s early years and barely look better than a Sega CD game.  At least the soundtrack still holds up.

It’s hard to think of any game that does a better job of being slightly above average.  Maybe Sega spent so much time on the visuals that they forgot they had to build a compelling game around it.  Who knows.  In the end while Clockwork Knight isn’t a bad game there’s little reason to come back to it.