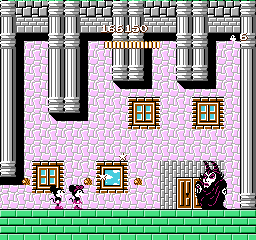 For all of its eventual Disney classics Capcom certainly got off to a rocky start.  Mickey Mousecapade is a terrible game that more than likely was snatched up to fully exploits their Disney license.  While Capcom would later go on to release a number of consistently excellent platformers it was inevitable that one would be the stinker of the bunch.  In my opinion Mickey Mousecapade was better off left in Japan.

Mickey and Minnie set out on an adventure to rescue their “friend’ from an evil sorceress.  This friend is left unnamed as well as all of the major characters. There’s a reason for this of course; Capcom did not want to get the pants sued off them.

In Japan Mickey Mousecapade is known as Mickey Mouse: Fushigi no Kuni no Daibouken and based on Alice in Wonderland.  I’m sure they wanted to avoid a lawsuit so Capcom removed most references to Lewis Carroll’s classic tale.  Unfortunately they weren’t so thorough and anyone with a functioning pair of eyes can tell.  What makes it even more hilarious is that the few enemies that were changed were replaced with other Disney characters so it isn’t hard to follow that train of thought and discern the game’s true premise.  Either way it has no bearing on the game’s glaring flaws that make it not worth pursuing for anyone, least of all Disney fans.

The first thing of note is that although you only control Mickey directly Minnie will mimic all of your actions.  You are initially unarmed but can find a star to dispatch foes.  The first star is for Mickey while the second is for Minnie, meaning it’s entirely possible to overlook it, Rendering Minnie a useless waste of space.   This gameplay idea makes no sense as it completely defeats the point of her following you for the length of the entire game.

Although Minnie only functions as an option like Gradius you can take advantage of this.  She is effectively invincible and you can abuse the hell out of this fact when dealing with enemies, especially bosses.  It’s tricky to get the positioning right but you can essentially make her do all of the work while resting in a safe spot.   This all hinges on you exploring the first level thoroughly to properly equip both characters of course but it’s more than worthwhile.

The 5 levels alternate between the larger maze style stages and traditional side scrolling.  Levels 1 and 5 charge you with finding the necessary keys to open the exit/boss room.  The maps are huge in scale and sort of resemble Milon’s Secret Castle.   The forest maze and the Ocean are (mostly) platforming levels that feature their own set of challenges.  Overall the game is incredibly short and could be completed in less than 15 minutes were it not for the many annoyances throughout.

Despite its length the latter portions of the game are viciously hard.  At 4 screens the Pirate Ship is brutal, with enemies that inflict massive chunks of damage in one hit.  You will not make it to Pete unscathed.  The Forest Maze is nearly impossible; the only vague clue given that you are on the right path is the changing of the seasons but that only goes so far.  To truly complete the level you need to blast open the hidden doors but this is never communicated during the game.

And this is to say nothing of the problems Minnie presents.  You can’t leave the current screen without her, meaning you’ll have to perform some tricky moves to get her to move along with you.  There’s a slight delay in her actions, which I interpret as the game waiting to see what you’ll do than repeating it.  The problem is, when Minnie dies you die.  If she falls in a pit, dead.  If you aren’t too careful there are enemies that can kidnap her, forcing you to go back through the level and find her to continue.  Her added firepower really isn’t worth the hassle of babysitting her.

I suppose licensing this game from Hudson Soft was cheaper than developing their own but at the time in my opinion Capcom shouldn’t have bothered.  There’s nothing of worth in this game to anyone, Disney or platformer fans alike.