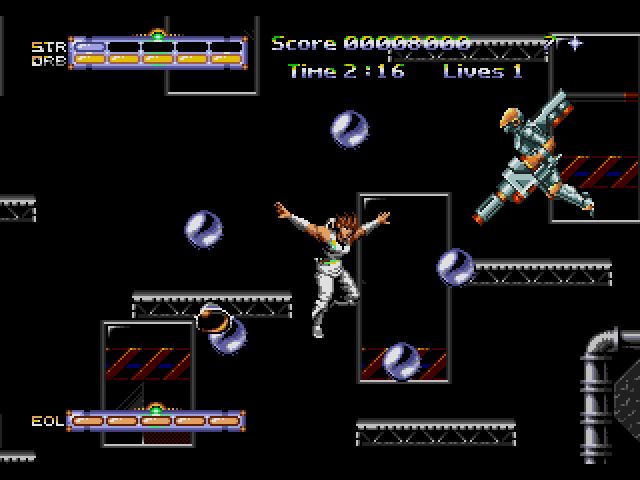 Man what were Capcom thinking?  I don’t know how the deal was worked out to allow a European company to produce a sequel to a beloved classic but whoever negotiated that contract has a silver tongue.  Strider in the arcade and its Sega Genesis port were both amazing games and any word of a sequel was cause for celebration.  We should have known better once word got out that an unknown developer was handling the game instead of Capcom but still!  We had hope!  That hope would be crushed soon enough as Strider Returns is simply a mediocre game.

The Princess of planet Margenta has been kidnapped by terrorists and the striders send Strider Hinjo to rescue her.  That’s right; it isn’t Hiryu this time although you’ll be hard pressed to tell the difference.  Because they were not able to license Hiryu from original creator __________ developer Tiertex created a new character despite both of their sprites being identical.

Regardless of the player controlled character Strider Returns attempts to mimic the gameplay and look of Strider and fails miserably in the process.  Because the developers were so focused on hitting all of the same notes as the original arcade game they failed to innovate and introduce any new mechanics in the game, instead creating a pale imitation of the game it was supposed to surpass.

At the very least Strider Returns gets the “feel” of Strider right.  Hinjo has a choice between two cipher weapons; the standard and functional blade or the sweeping cipher a wider but less accurate attack.  Not only does Hinjo look like Hiryu he has all of the same moves in that you can slide and grapple onto nearly any wall and ceiling.  The only additional weapons come in the form of a shuriken attack that you need to build a special meter for and a rotating shield.  Sadly the cool helper robots have been nixed but at least you can still power-up the cipher like the first game.

It’s at this point that the game goes completely off the rails.  While the levels are evocative of many of the originals they come across as though the developers simply looked at the arcade game and tried to replicate it in their own style.  The levels lack any of Capcom’s nuance and attention to detail.  Enemy placement is just stupid and not well thought out, with many placed in spots that force you to take hits to proceed.  There’s a hall on the very first level that has a mech that fires an infinite stream of rockets faster than you can react in particular.

The sequences that were no doubt designed to invoke memories of the first game fall flat.  The laser traps of stage 2 are frustrating to deal with due to the game’s sluggish pace and eat away precious time from the clock as you wait to move on.  The first boss, Solo was a cool mech in the first game but here he is so easy to kill that they shouldn’t have bothered.  The hit detection is suspect, with many instances where it’s hard to determine if you are having any effect on a target.  It’s not as if the game needed any more artificial challenges since you are limited to 3 continues but it is what it is.

The graphics on first glance might fool you into thinking they nailed the look of the game.  In motion it falls apart.  The game is a choppy mess and has a very dithered look to it.  The overall color scheme of the game relies far too heavily on metallic grey and it becomes boring to look at after a while.  The new enemies as well are suitably uninteresting in their design.  And I can’t believe I’m even typing this but the game has slowdown!  Why?  There is absolutely nothing happening in the game that should tax the system even a little.

If you placed the two games side by side you’d never guess Strider Returns was released two years later.  It has a very Amiga style look to it which is apt as the game was originally released for European PCs.  Those of you wondering why that is so bad should know that during the 16-bit era most games from Europe were beautiful trash; great technically but terrible in terms of gameplay.  That Strider Returns fits the description so well shouldn’t come as a surprise.

I’m relatively sure the person(s) at Capcom responsible for allowing this travesty to see the light of day had to pay with a quart of blood.  Don’t tarnish the memory of Strider by entertaining the thought of playing this game.  It doesn’t deserve to share the name Strider with the classics that Capcom created.