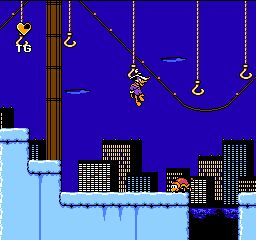 I love me some Darkwing Duck.  Created as a spoof of superheroes, the show was one of Disney’s best original creations back in the early 90s.  This was the golden age of Disney properties so it came as no surprise when Capcom, purveyors of many a classic Disney platformer released one based on the series in 1992.

Darkwing Duck was released by Capcom in the summer of 1992.  Crime is at an all time high in St. Canard fueled by the organization F.O.W.L.  Darkwing Duck is called in by S.H.U.S.H to assist in curtailing their plans.  Featuring cameos from the most famous villains in his rogue’s gallery Darkwing Duck is instantly recognizable to any fan of the TV series and features excellent gameplay albeit in a familiar skin.  Like Duck Tales it shares its lineage with the Mega man series and while it is somewhat derivative is still enjoyable.

There’s no mistaking it, this is basically a Mega man game with the Disney license slapped on top, which isn’t necessarily a bad thing.  You have a choice of any 3 stages initially with the last 3 available once they are cleared.  Darkwing possesses a few skills the Blue Bomber does not: he can block most projectiles with his cape and grab onto nearly any post to hoist himself up.  While you won’t be taking the boss’s powers every level has at least one alternative gas pellet that produces a variety of effects.

The strongest component in the game would be the level design.   That’s to be expected of course since they are built from such a good foundation.  Despite its pedigree Darkwing Duck still manages to provide enough unique scenarios based mostly on your ability to hang from objects; you’ll forget you’re essentially playing as Mega man with a cape.  The challenge is tuned a bit oddly; the platforming is rarely complicated but the standard enemies can take a beating before going down.  Worse yet, they’ll come from obtuse angles and they have a brief moment of invincibility when hit.  It’s nothing you can’t overcome but is worth mentioning.

As much as it does try and shed its roots you will definitely notice that this is running on a modified Mega man engine.  From the background tiles to the enemies themselves this closely resembles Mega Man 5 which was also released the same year.  In some ways you could say the same is true of Duck Tales; these both share some similarities but then again both series take place in the same world.  The only real references to the show aside from some of the characters are the bosses who sadly lack any of the personality they exhibited in the show.  I can’t really harp on the game too much because of Capcom’s cost cutting measures though because the game is still pretty strong regardless.

In spite of the uneven challenge and recycled engine Darkwing Duck still ranks up there with Capcom’s other Disney games.  You don’t hear too much about it though because it was released so late; in 1992 myself and millions around the world I’m sure were enamored with the now legendary game lineups for the 16-bit consoles.  However!  This is a perfect opportunity to catch up on a great game you might have missed out on back in the day.