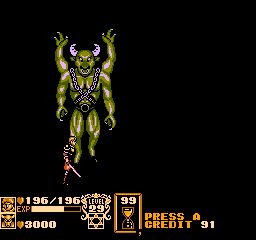 As shallow as many of them were I do genuinely miss the beat em up genre. Games like Final Fight showed just how amazing the genre could be but unfortunately it was run into the ground during the 16-bit era by games that didn’t aspire to be more than simple clones. It sucked because the brawlers at the tail end of that era were actually evolving and really turning into something special thanks to more powerful hardware. Games like Alien vs. Predator, Armored Warriors, and Dungeons & Dragons (huh, all Capcom games) were amazing examples of where the genre was headed.

Gaiapolis was one of the last arcade titles that wasn’t a fighting or racing game I got to play before my local arcade closed. This was the type of game I hoped would receive a Saturn or PlayStation port but it was very clear where the industry was headed and 2d wasn’t part of it. However in China an unlicensed port was made for the Famicom. Obviously it isn’t anywhere near the quality of Konami’s coin op but is decent for what it is.

The prince of Avalon is still out for revenge against Zar Harc Empire for destroying his homeland and is joined by two companions. The characters have all been renamed with the Prince, Dragon, and Fairy now being named Ken, Lin, and Amy. I suppose it helps give them an identity rather than just a generic descriptor. For the most part the game follows the arcade game’s plot although the few cut scenes don’t exactly create a coherent narrative. Gaiapolis was story heavy for an arcade game so it is sad to see most of that lost in translation.

This is an interesting release to say the least. The vast majority of Sachen’s games are complete crap yet Gaiapolis seems to have been made with some care. It more or less follows the arcade game’s plot and surprisingly is completely in English. The levels aren’t the same but are at least thematically similar. While most of the same features are present there are still a few problems that really bring the game down. However all things considered this turned out far better than you would expect given the disparity in hardware.

The game is played from an overhead perspective rather than the typical side scrolling format of most brawlers. That isn’t the only difference however as there are some RPG elements. Experience points are gained from killing enemies or picking up items and while it adds a little depth the addition is superfluous. Enemies spawn in set locations and groups and you must kill them before moving on making everyone’s character growth the same. The differences between characters aren’t as pronounced here which makes your choice irrelevant.

By brawler standards this is a pretty simple game since your only means of offense is a simple three hit combo and an occasional magic spell. The bad hit detection and the viewpoint make attacking enemies more of a hassle than it should be as swings that are clearly connecting simply don’t register. This is especially bad during boss battles where despite their size it isn’t clear where to attack. It makes these already long battles even more frustrating. This was a decently long game in the arcade but this is thankfully shorter; I wouldn’t have been able to tolerate this if it had all 17 (!) of the arcade’s stages.

As frustrating as the game can be there really is no challenge due to the fact that you have 99 credits shared between two players. Even if one or both players is an incredible moron there is no possible way that you won’t finish the game with that much of a buffer. There are a large amount of cheap hits due to the perspective but the game throws life restoring food at you after every group of enemies. Leveling up also refills health and you’ll level up every few minutes. Whether this was done as an acknowledgement of the game’s problems we’ll never know but at least you’ll definitely see it through to its non-ending.

The graphics are pretty damn good for an unlicensed game. While it doesn’t have the same stage layout as the arcade the level themes are the same. There is a decent variety in the settings with the backgrounds being pretty detailed. The sprites are very large, larger than in most NES games, especially the bosses which are screen filling behemoths. The animation isn’t the greatest and the developer’s technical ambition gets the best of them as there is some very bad sprite flickering and slowdown. Where the visuals excel the music does not however. The music is grating and honestly is so bad I muted the sound which is something I rarely do.

It’s sad that this is the only home port of a truly amazing game. If you were lucky enough to play Gaiapolis back in the day you are better off sticking with your memories as this version only captures a slice of the game’s majesty.   Honestly this review really isn’t about recommending the game or not since the chances of actually finding the cartridge are next to impossible and it isn’t worth it. This was simply a means of examining a curiosity in game history.