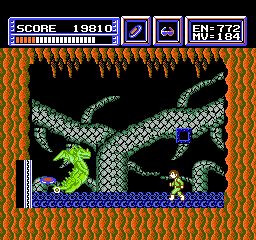 Bio Senshi Dan was once scheduled for a US release under the title Bashi Bazook: Morphoid Masher. Honestly they should have stuck with its original title as Bashi Bazook is flat out stupid. And this is coming from someone who liked Kabuki Quantum Fighter in spite of its dumb name. While I won’t go so far as to say that BSD would have put Jaleco in the same breath as Capcom or Konami it would have done wonders for their reputation as more than just a Bases Loaded factory. Originally released in 1987 Bio Senshi Dan ranks among that second wave of NES games that really pushed boundaries and while it has its flaws is still an incredibly solid game.

In the year 2081 Earth is in ruins. Aliens have overrun the planet, leaving destruction in their wake. Their actions are guided by the hand of a mysterious entity known as the Increaser. The last hope of the planet lies in the warrior Dan who is sent back in time to the year 1999 before the aliens invaded and defeat the Increaser before he rises to power.

At first glance Bio Senshi Dan looks like a typical action game when in fact it is actually much more than that. Each of the game’s five levels is actually one large world which you can freely explore. There are plenty of rooms scattered about with the denizens of each world offering information, weapons for sale, or other services. The levels aren’t so large that you’ll end up hopelessly lost but a map of some kind would have come in handy, especially considering there are multiple teleporters in each stage and some corridors look identical. There is no time limit in the normal sense however there is a meter (QV for Queen’s Vitality) that tracks the boss’s health; the longer you take the more it increases.

Although you’ve been sent into the past with nothing but a funky green jump suit and a weak sword there are plenty of upgrades waiting to be bought. Defeated enemies drop energy that functions as currency which the numerous vendors are all too happy exchange for weapons. The default knife is quickly upgraded to a throwable variety that returns and inflicts additional damage on the way back. The rest comprise a wide spectrum from the psycho blossom, the rolling shield to the powerful thunder sword. These side weapons use energy but the game is so balanced that it is rarely a factor.

All of the exploring will remind you of Metroid but it seems Dan has graduated from the Simon Belmont school of platforming. The game features the same rigid sense of control where once you perform an action you are locked into it. For the most part it isn’t a problem in the strictest sense; while you are climbing ledges and such there is only one small section in Area 4 that has a few instant death pits flanked by respawning enemies like the Medusa heads. The controls as a whole are very stiff which is frustrating. Dan is slow to turn around crouch and as such you will suffer a number of cheap hits. Luckily you are equipped with a generously long life bar and can refill health at inns.

Even taking the stiff controls into account and the large number of cheap hits this is still a pretty easy game. While each level is decently sized you can stumble your way to the end level boss relatively quickly although you will miss health upgrades and optional weapons. Unless you go out of your way to waste time the boss’s health should be within an average range and if you have done even a modicum of exploring chances are you’ve purchased a weapon that will decimate them in seconds. Hell you can buy everything at the beginning of the last stage for a cheap 250 energy. Speaking of which it is only in the last two stages where the difficulty jumps significantly but even that isn’t saying much. All told I estimate most will finish the game in about 2 hours which is a bit disappointing but seems appropriate.

A bit rough around the edges but still entertaining nonetheless, Bio Senshi Dan is a good game that I’m sure would have found an audience if its US release would have went through. There is a fan translation available as well as a complete American prototype but no Japanese is required to enjoy the game.